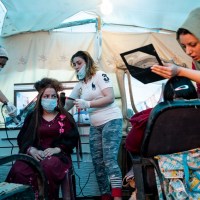 Life is complicated. Relationships are complicated. The everyday frictions that we all experience at some point or another—family tensions, nagging health concerns, marriage issues—don’t stop just because the monolith of war rears its terrifying head. They don’t get resolved just because families and friends need each other more in the face of life or death.

All of these little things—life—go on despite the big things that loom over us. Very often, they are exacerbated by the loss and destruction and multiple other massive stressors that war brings.

This was the case for Buthena. Pregnant with her third child when ISIS invaded her hometown, Buthena took refuge with distant family in Baghdad to ensure that medical care was readily available when she had the baby, intending to stay only until the child was born. Her husband, kids, and the rest of her family went ahead to this camp in northern Iraq. Those few months turned into 3 years, and Buthena set out on her own to join her family in the camp, with their now-toddler.

The reunion wasn’t quite what she’d hoped—she got pregnant again, only for her husband to abandon her. And Buthena was left alone with her four young children and another on the way, with only her mother for support. Providing for her little ones was getting harder every day, missing the extended family connections that are an integral part of life in a displacement camp…. as they are anywhere else in the Middle East.

Buthena badly needed a sustainable way to provide for her family. If you’ve ever been left on your own, with precious little assistance in an already difficult situation, you know how that feels. On some days, the barriers to being the hardworking, productive person you used to be, feel completely insurmountable. Having meaningful work is critical to keep moving forward. Doing something that makes you feel capable and in control of your life cannot be overstated.

That’s what Buthena has now, with your help.

When refugees and the internally displaced come to a camp, it’s not a short term situation. When large swathes of cities are destroyed by war, rebuilding and returning is a complex and large scale undertaking. Some refugees and displaced people are in camp for a couple of years, and others may well remain for up to 20 years.

Buthena and the majority of displaced Iraqis have been in refugee camps for 4 to 5 years on average. Most will not be returning to their homes—old or new—anytime soon. So no one languishes around, feeling sorry for themselves. Not especially if you’re a mom. There are children to feed, clothe, and build as good of a life for as you can, under the circumstances. People get married, divorced, have birthday parties, make friends, lose friends, go to school.

Life goes on in the shadow of exile.

Women continue the private rituals that are a part of who they are. The salon you helped Buthena start is the only one in the camp of thousands of displaced Iraqis. And it is more than a place to get their skin cared for, eyebrows tattooed, or hair done for a celebration. Buthena’s salon is a space where women can come together to share their lives and care for themselves—no wonder her business is swelling already!

It is true all over the world, that women are the force that drives life forward. When you invest in helping a woman start a business, you are also providing for her children, her family, and wider community.

Invest in our refugee sisters. Give now.