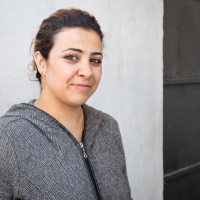 It’s so gradual sometimes, the rising tide of desperation. One day you’re home in Syria, newly married and full of hope. Five years later you are a refugee in Iraq, with three beautiful children and so much debt neither you nor your husband can sleep anymore. You don’t eat. Worry is the companion that never leaves.

How did life shrink to this?

Things weren’t good for Sozan and her husband before they left Syria. There was no work, and no way for them to continue to live there. War might be good for the economies of countries who manufacture and sell weapons, but it’s terrible for the economy of the country at war.

The physical loss of whole cities to bombs, and countless men to death at the end of a missile, causes life to stop for many. Bakers might lose their shops to air strikes, their bread ovens reduced to debris spread over blocks by the explosions. That means flour suppliers lose customers, and they are forced to shut down. That means mills that ground the flour lose customers, and they are forced to shut down. That means farmers who planted the wheat lose customers—they can’t sell their harvest, have no means to buy more seed for the next year, and so their fields lie fallow. Now, multiply this kind of loss over a whole country at war for seven years. Communities no longer have access to their staple, daily bread—the bakery and supply chain is gone. And even if bread was available, they no longer have the means to buy it anyway.

Sozan and her husband originally planned to come to northern Iraq for a year. It was more stable than Syria, and seemed a good choice for their family. For Sozan, leaving her parents was an agonizing decision to make, since she’s their only daughter. But they had a plan: go to northern Iraq for one year, earn and save as much money as possible, then return to Syria and continue building their lives together.

It was all supposed to be quick—temporary.

Things haven’t exactly gone to plan. Her husband has a hard time finding work in Iraq—he is one of a quarter of a million Syrians competing for few jobs. One year of living in Iraq turned into five years, and instead of being closer to their goals, they were slipping farther behind.

It’s a lot of pressure on a young family.

Sozan wanted to take some of the burden from her husband, and help earn income for her family. She also wanted to ease her heartache—it broke her a little every time her children asked for something basic she couldn’t provide. Two years ago she taught herself to knit, over one solid week of watching YouTube videos. With the help of her virtual teachers and the ability to pause and repeat segments as often as needed, she quickly mastered the art of making fabric from two thin sticks and a length of yarn.

Recently, along with a small collective of women in her refugee camp, she’s put her skills to use making sweet sweaters for babies, for sale now in our online shop.

Sozan enjoys knitting. When she’s knitting, her mind is occupied with thoughts of a good future, because she’s able to earn money. She thinks about how much she’s enjoying herself, while supporting her family.

Sozan experienced life in a country at war—she certainly isn’t afraid of things like hard work or looking her problems squarely in the eye. The money that Sozan earns provides her family’s daily needs. The money her husband earns, when he has work, pays down their debt. It’s a tightrope walk every month. But every time someone sees one of her baby sweaters, falls in love, and buys one, it puts her closer to realizing her goals, and farther from the crush of debt.

Help displaced women create a new future for themselves and their families. Give now.