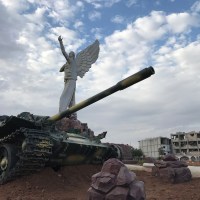 Note: This post was last updated on October 22 to reflect the latest developments.

Turkey has launched an offensive in northeastern Syria, following the White House’s move to withdraw troops from the border. What’s behind the US decision to pull back and Turkey’s decision to invade? What will happen next? And how will it impact our friends in the region?

Why has the US withdrawn its troops from Syria?

President Trump has long promised to bring US troops home and reduce the military’s involvement overseas, while at the same time maintaining a small footprint of troops in northeastern Syria. In fact, US uncertainty about its role in Syria predates Trump.

Former President Obama famously drew a “red line” around the use of chemical weapons in Syria—then failed to intervene when such weapons were reportedly used. President Trump has twice authorized strikes in retaliation for alleged chemical attacks, but they did little to change the situation on the ground.

The 1,000 US troops still in Syria are there to support the SDF, a Kurdish militia, in its fight against ISIS. Now that ISIS has lost its territory, the White House is claiming that the coalition with the Kurds only temporary and for a singular purpose—to defeat ISIS.

However, this only accounts for ISIS as a territory-holding entity. ISIS may have lost its land, but it still wields lethal force across Syria and Iraq.

The Kurds in Syria have long hoped to set up their own autonomous region post-war. The latest move from the White House makes clear is that the US does not care if the Kurds are able to establish their own functioning, flourishing society.

The US is also failing to think long-term about ISIS. It was not enough to have defeated them territorially. Withdrawing from Syria now, and abandoning our Kurdish allies, opens the door for ISIS to regroup.

[UPDATE 10/14] Days after the Turkish military began its assault on northeastern Syria, Hundreds ISIS supporters and family members escaped from one camp after it was shelled and have been attacking guards and burning tents at another camp close to where our team is working.

[UPDATE 10/22] Despite the president’s promise to bring troops home from Syria, they are in fact moving just across the border to western Iraq for the time being. As they drove out of northern Syria, several military vehicles were pelted with food by angry civilians fearful of what will come next. It appears the US did not consult Iraq before entering its territory; the Iraqi government has already signaled that the US does not have permission to stay. 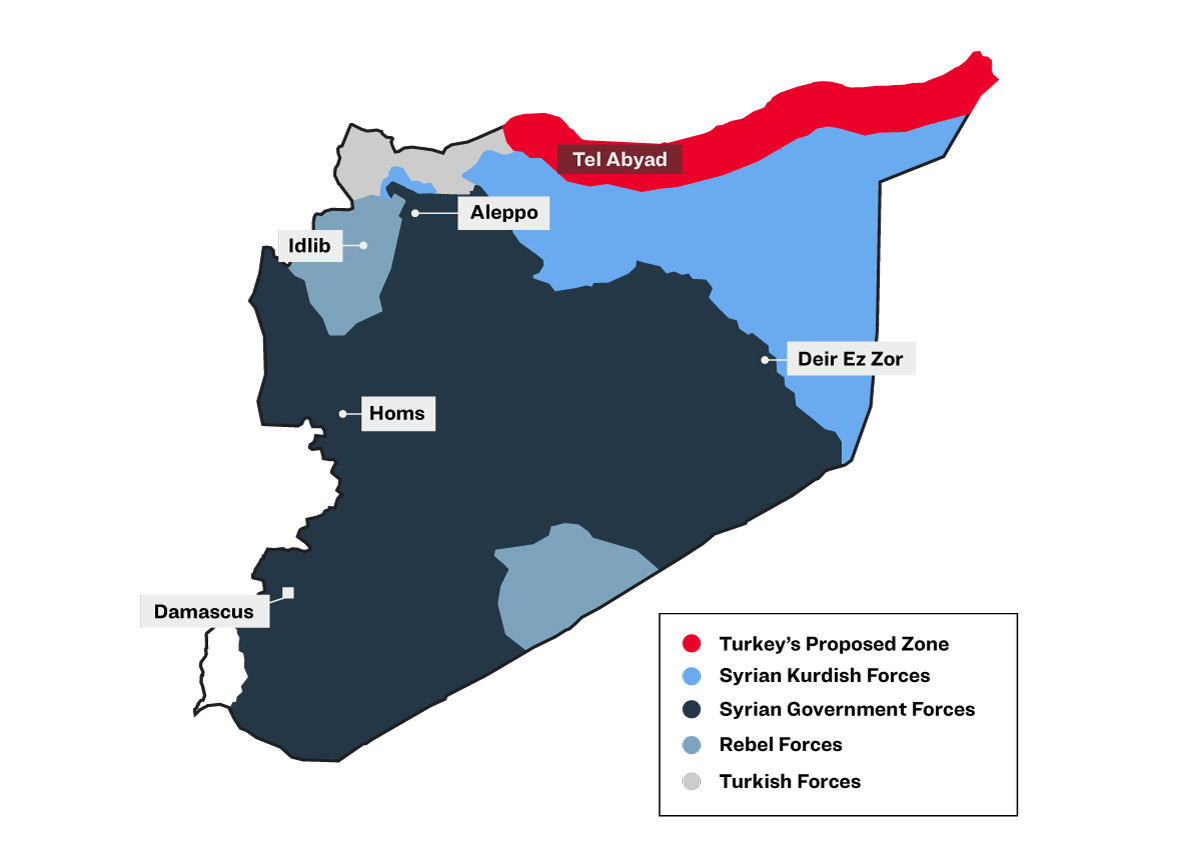 Why has Turkey launched an offensive in northern Syria?

The Turkish government views Kurdish-controlled northern Syria as a terror den where insurgents plot attacks against Turkey. Now that the Syrian civil war is in what many believe to be its final stages, Turkey fears the establishment of a functioning and powerful Kurdish state on its border, viewing it as a direct threat.

Turkey is also keen to get rid of the 3.6 million Syrian refugees who have sought shelter there since the Syrian war began. As the local economy weakens, Turkish attitudes toward refugees have soured.

The Turkish government hopes to forcibly resettle Syrian refugees on the other side of the border, in northeastern Syria. But most of these refugees are not from this part of Syria—effectively, this is like being displaced all over again, right into the middle of a warzone.

What is the conflict between Turkey and the Syrian Kurds all about?

Kurdish hopes of independence date back more than a century. In the late 1970s, Kurdish insurgents began waging an armed conflict against the Turkish state. Infighting and even violent attacks ensued, leading governments around the world to label the separatists as a terrorist movement.

Both sides perpetrated atrocities against civilians in the conflict. At times, the Turkish government sought to erase the Kurds’ identity, banning Kurdish language, customs, and traditional clothing.

Related: Who Are The Kurds?

Kurdish separatists took refuge over the border in Syria, where a Kurdish population was already established. In fact, one of the movement’s overarching goals is to unify the broader swath of land that they call Kurdistan—a land that stretches across Turkey, Syria, Iraq, and Iran.

What role have US troops played in Syria?

The US has about 1,000 troops in Syria, primarily offering support to Kurdish forces leading operations against ISIS. An estimated 11,000 Kurdish soldiers have died fighting ISIS. Eight US service members have also died in Syria.

The US presence in northeastern Syria has helped prevent the outbreak of war between Turkey and the Kurdish militia, until now. Turkey has been reluctant to cross the border into Syria, not wanting to be responsible for the death of US soldiers. The Turkish president has made no secret of the fact that he wanted President Trump to clear US soldiers from the border so he could begin an offensive against the Kurds.

[UPDATE 10/14] Many former US military personnel now work as contract security officers at ISIS detainment camps in Syria. There are unconfirmed reports that personnel are pulling out along with US military, leaving a critical void in ISIS camp security.

What will happen now that US troops are leaving?

It’s already started. Turkey has launched an offensive, including airstrikes, in northeastern Syria. Turkey ground troops have also massed at the border.

Related: Withdrawal From Syria: What It Means for Allies, Refugees, and ISIS

It remains unclear how far the offensive will go—whether Turkey will limit its incursion to the border area only, or whether its forces will seek to bring the whole region to its knees.

Turkey has been clear about its intention to send refugees back to Syria, leaving millions unsure of their future.

[UPDATE 10/22] Days after US forces began their withdrawal, Russian and Syrian government forces moved in, solidifying their influence over the region. A 5-day pause in fighting was negotiated by the US and Turkey, though there were continued reports of violence. It remains to be seen whether full-scale war will break out again once the pause expires. Already as many as 300,000 people have been displaced by the Turkish offensive.

Turkey is planning to send millions of Syrian refugees back to Syria. That’s a good thing, right?

No. Most of the 3.6 million refugees living in Turkey are not from this part of Syria. This is, in effect, a second displacement for these families, putting them right in the middle of a war zone.

It’s a whole population—families, children, women, widows. And a large group of disaffected young men, many of whom were only boys when they first landed in Turkey, but are now fighting age. They’ve never known anything but displacement. Now the Turkish government is talking about forcibly uprooting resettling them into an environment of active conflict.

These are exactly the kind of conditions that groups like ISIS will exploit. This is how violence spreads from one person to another, from one camp to another. If these families get thrown into a warzone where one of the only ways to earn a living is by picking up a gun, what will stop the cycle of violence from repeating itself again and again?

How will the US withdrawal affect ISIS?

Even before the withdrawal, the Kurds were already having to divert resources away from guarding ISIS prisons and camps. In the aftermath of the war against ISIS, the Kurds have assumed responsibility for the prisoners no one else wants—including foreign fighters that other countries, including the US, refuse to repatriate.

Related: Love Anyway Podcast: Breaking: US Withdraws from Syria (And it Could Lead to War)

The Kurds have also had to scale back security checkpoints in the Syrian countryside, diverting resources to the Turkish border, when an offensive is now underway. We’ve experienced the change in the security situation firsthand. If it’s easier for us to get around, then it’s almost certainly easier for ISIS militants to do so, too.

We’ve seen this playbook before. When the US pulled out of Iraq in 2011, the insurgents we thought we had defeated reconstituted. Three years later, they swept across Syria and Iraq, known as ISIS.

All the cards are set for something similar to happen in Syria if we are not vigilant.

What can we do about the crisis in Syria?

As overwhelming as it may seem, we are not powerless. We can show up for those caught up in this war—for the two million people who call northeastern Syria home and the three million who may be displaced for a second time.

We have worked in Syria for over three years, providing emergency food, medical care, shelter, and jobs. We have ambulances and mobile clinics prepositioned and ready to go where the need is greatest, at a moment’s notice. We have emergency kitchens we can deploy to feed families on the run.

[UPDATE 10/14] We are mobilizing emergency food packs for families on the run. Your $40 will feed a family of six for a week.

[UPDATE 10/22] We have two medical teams serving families on the run—treating shrapnel wounds, burn victims, and cases of malnutrition. Our teams have been shot at while delivering aid and are having to navigate around sniper points. Food supplies are also critical, as this crisis shows no sign of letting up. We are mobilizing more resources to continue serving our friends who are running for their lives.

By showing up where they are, we can help stop the spread of war. We can help them take the first steps to something better. We can show our Syrian friends they are not forgotten.