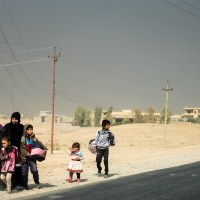 The words we choose are important.

They carry weight, a particular connotation, emotion, or history. The media knows this. Politicians know this.

So when a particular group is labeled “migrants” or “refugees,” for example, it matters. Assumptions are made based upon the label given, and certain rights are assigned… or taken away.

Here’s what you need to know about the differences between refugees, asylum seekers, immigrants, and migrants—and why it matters when and how each term is used.

A refugee is any person who has been forced to flee their country due to war, persecution, or because their home government cannot or will not protect them.

When a refugee flees, they are registered with an official agency, such as a government or the United Nations, which allows them to gain access to state and international aid and assistance.

Refugees have legal protections guaranteed by the United Nations Refugee Agency, or UNHCR, including economic and social rights, and the ability to bring immediate family with them. Every refugee is initially an asylum seeker, although not every asylum seeker becomes a refugee.

An “internally displaced person,” or IDP, is similar to a refugee in many respects, except they did not cross an international boundary when they fled war, persecution, or natural disaster. They also do not enjoy the same legal protection or have access to the same resources as refugees. Many of the families we serve in Iraq and Syria are technically considered “internally displaced persons.”

Asylum seekers are not officially designated refugees, but they have appealed to achieve refugee status. They are leaving their country of origin in order to escape war or persecution due to their nationality, race, religion, or political affiliation.

Under recent decisions made by US Attorney General Jeff Sessions, gang and domestic violence are no longer reasons one can seek asylum in the United States, even if a person’s home government does not provide adequate protection. As a result, families fleeing threats of death by gangs are considered migrants (see below) and therefore not be granted any special protections or permitted to seek asylum in the US.

A large number of people who come to the US-Mexico border are appealing for asylum because of dire economic circumstances or because of gang or domestic violence. Under current US law, none of these people qualify for asylum because the government does not acknowledge it to be a credible or reasonable fear.

Migrants are people who are leaving their home country and pursuing residency in another place, generally to find work, seek education, or to be reunited with their families. Unlike refugees, migrants can return home to their country if they wish.

“Migrant” is a difficult label, however, and is easily abused or misunderstood. Many people in Central America face extreme poverty and lack of resources (such as food, shelter, access to public services) to meet their basic needs. They are labeled “migrants” even though they have the same limited options a refugee may have.

Some believe that that the term migrant should be redefined as a more precise, neutral term. As currently defined, a “migrant” might be someone who relocates for a job, just as easily as it could be a mother fleeing Guatemala because of horrific gang violence. The two situations are not comparable, but currently the same label would be applied in both cases.

An immigrant is an individual who willingly leaves their country of origin and legally enters another country where they are granted permission to permanently resettle, thus qualifying them to work without restriction.

Their reasons for wanting to resettle can be many—from a longing for economic prosperity or a better education, to the fulfillment of a dream or reunion with family.

Refugees are those who have been forced to leave their home country. Official refugee status is granted by the UN or an official agency. Migrants, on the other hand, are those who have chosen to leave and theoretically could return home. There are many, however, who feel like they have no option but to flee. Still, because they are not officially recognized as refugees, they are deemed migrants.

A migrant is an individual who is purposefully on the move in search of a better life, but arguably could return home if they chose. An immigrant is an individual who willingly leaves their country of origin for any number of reasons and legally enters another country, where they are granted permission to permanently resettle. The term “migrant” denotes temporary movement, while an immigrant typically has permanent residency. Migration can occur within the borders of the same country, or cross international borders, while immigration occurs when crossing an international border and becoming a permanent resident in another country.

A refugee is someone who was forced to flee because their home country is unsafe and their government cannot or will not protect them. An asylum seeker is someone who is seeking protection in another country but has not yet obtained official refugee status. Their reasons for leaving home are often due to war or persecution as well.

Refugees have been forced to leave their home, while an immigrant chooses to leave. Refugees are granted certain legal protections by the UN Refugee Agency (UNHCR). Some are eventually resettled in a new place. Immigrants legally enter a country of their choosing, follow that country’s procedures for entry, and have been allowed permanent residency.

It matters what labels we use, what terms we apply. It changes our perceptions, it creates a narrative. It can incite fear or invoke sympathy. But what matters even more is that we not lose sight of the humanity of people, no matter what label is applied. Each person has a name, a face, a family, a history. When we bury people in rhetoric, when we dehumanize with a term, we strip others of dignity, we change the way they are seen and heard and loved.

But when we pull off the mantle of labels, when we allow people to move past assumptions, past false narratives, they are able to reclaim their story, their humanity. We allow them to rise.

Want to learn how you can show up for refugees, migrants, and neighbors? Subscribe today.

Update: an earlier version of this post included people fleeing natural disasters as a definition of refugee. This is incorrect and the post has since been updated.