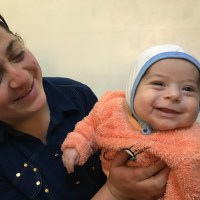 Refugees are not victims of their circumstances. They’re not people to be pitied or to be saved. They don’t want a hand out or to be a charity project.

The fact that they’re displaced is the least interesting thing about them.

Take our friends Marwa, Gozê, and Sozan. Four years ago these women lost everything to ISIS. Today, their work is being featured in the Metropolitan Museum of Art in New York City.

The most interesting thing about all our refugee friends is their talents and skills, the ways that they think, the things they create and make and do… and where it can take them, if they’re given the opportunity.

They may have been stifled by war. But they are determined to rise.

Refugees once had a life that was, by all accounts, “normal.” It’s easy to forget, if you’ve only ever known them as refugees. But before, they lived with families, went to school, worked jobs. They visited with friends, cooked dinner, cleaned the house, celebrated holidays and birthdays and family traditions.

War might have taken some of that. It ruined cities. It broke apart families. It railroaded future plans. Along the way, it also took away our ability to see the potential in those displaced by violence.

But these refugees have survived genocide. They have endured unspeakable trauma and hardship. They’ve lost their homes, their villages, their neighbors…

And now they are featured in one of the premier art museums in the world.

When we partner with refugees, it’s not because we think they need us. It’s because we know how much we—the world—needs them.

The Sisterhood Collection of candles, soaps, and tea towels are for sale in the Metropolitan Museum of Art in New York City. Presented with the exhibit, The World between Empires: Art and Identity in the Ancient Middle East, these refugee-made goods are available for purchase at the Met until June 23.

You still have a few weeks to see them, if you find yourself in New York City.

But if you can’t make it to the Met, you can still purchase handmade soap, super-soft cotton tea towels, and other refugee-made goods in our Preemptive Love Shop.

The resilience and drive of these refugee makers is unstoppable. From the rubble of war to the museum lights of the Met, their journey isn’t over. It’s just beginning.