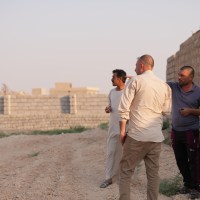 The full heat of the August sun beat down, as Zido stood on the flat roof of his home and scanned the horizon for the ISIS convoy he knew was coming. Hour by hour, Zido’s homeland in Sinjar, Iraq was being transformed from farmland into killing fields. One village at a time, his people, the Yazidis, were being destroyed. Men and older women were slaughtered en masse and dumped into hastily dug mass graves. Young women and girls were taken into slavery, bought and sold amongst ISIS fighters.

Zido’s wife Marwa and their children fled for the nearby mountain, in hopes that they would escape certain death, or worse, at the hands of ISIS. Along with their neighbors, they spent the earliest days hiding from ISIS under that blazing August sun—with no food, water, or shelter. They were in deepest trauma, trying to process the slaughter of their relatives, even as the most vulnerable around them on the mountain–babies and the elderly–died of dehydration.

Zido and his cousins remained in the village as a last line of defense. They stayed to protect the homes where generations lived together to care for parents, grandparents, and to welcome newborns. They stayed even as their hearts were torn in two: worried for their wives and children on the mountain, and yet desperately wanting to save their homes.

They stayed for days, waiting for help that never came. The national army never came to protect them. The regional militias didn’t come either. Zido and his cousins stood alone to face the full, sick, genocidal rage of ISIS racing toward them until the last moment when they had no choice but to flee too.

When Zido raced down the steps from the roof where his family slept in the open air when the nights were too hot, across the little courtyard where they ate lunch together circled around a woven mat, and out through the narrow gate that provided their family with a little privacy—he had no idea he would never be able to go home.

When we met Zido and his family near the end of 2014, it was three months after they fled home, running for their lives. That’s very little time in terms of surviving genocide. They were understandably cautious with their trust. We met in the context of delivering aid—food so they didn’t starve, warm coats and heaters so they didn’t freeze to death that first winter. It would have been easy to maintain that kind of transactional relationship. But that’s not what any of us needed. In the face of continuing violence in our region, we needed community. We needed to be known by each other, invested in each other.

Slowly, over innumerable cups of tea and visits, that happened. Zido’s family insisted we stay for meals, sharing rice, beans, and simple tomato and cucumber salads studded with pomegranate seeds. We shared knowledge about making soap and helped them to start a business that supports their family. We celebrated their first sales with shouts and so many smiles. We cried together when health scares threatened to end lives too soon. We celebrated births and marriages. And together we found a way forward through pain, and grief, and eventually joy. We became community for each other—everyone giving, everyone receiving, everyone invested in a world without violence.

It’s been seven years since that bloody August week when ISIS tore their lives apart. Seven years of loneliness, being strangers in other’s villages. It’s been seven long years that Yazidi families have yearned to return to their sacred land.

It’s time to go home. And we need to make it happen as a community.

When Yazidi families faced the violence of ISIS, they were very much alone. The trauma they experienced was rooted in abandonment—the world watched in horror and yet the Yazidis were left on their own. We have the chance to heal a little of that.

We can’t undo the trauma of betrayal Yazidi families experienced. But we can continue to walk alongside and create new stories of community. We can continue to invest in these families—listening to their hopes for the future, providing business start-up funds so they can support their families, and building homes that establish a new foundation for generations to come.

We began with a small group of families, including Zido’s. Partnering with them allowed them to return many years sooner than they would be able to do on their own. Their family was so eager to return, they didn’t wait for their new home to be finished. They piled their belongings (including their soap making equipment) into a truck, drove through a long night, and unpacked into a raw concrete shell. It wasn’t beautiful yet, but it was their home. And together, their family and our Preemptive Love community, are investing in a world without violence, where every family has what they need to live.

There are thousands of families, displaced by genocide, desperate to return home. Thousands of families are eager to write a different story for their future, one not based on violence, rather rooted in community. And we have the chance to make it happen, one family at a time.