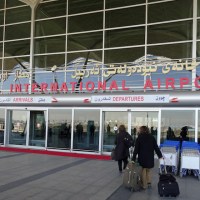 The last international flight left Iraqi Kurdistan tonight, as authorities in Baghdad imposed an air embargo over the region, in response to Monday’s independence referendum. The embargo affects our staff in the area, making travel in and out of Kurdistan far more difficult. It has the potential to disrupt our work with refugee families here. It’s also affecting the livelihoods of thousands of people in an already fragile economy.

A large majority in Kurdistan voted to separate from Iraq. The vote itself does not trigger independence, but it’s meant to force negotiations with Baghdad. Authorities in Baghdad, however, are refusing to negotiate unless Kurdistan nullifies the referendum. The air embargo is their latest attempt to put pressure on the region.

There are conflicting reports right now on how long the air embargo will last. Some speculate it will be a few days or weeks. Other are saying it could be months—possibly until the end of the year.

The longer it goes on… the more severe the impact will be on our team, the families we serve, and everyday families just trying to get by. For now, air travel within Iraq is still possible. But without revenue from international flights, Kurdistan’s two commercial airports will struggle to stay open.

The embargo could also put 7,000 people out of work, according to representatives from the travel and tourism industries here—hurting families in an economy that was struggling long before the referendum.

A friend of one of our local team members, who works at one of the two main airports, was sent home after the last international flight left today. He doesn’t know when he’ll be called back to work. As of this evening, he was getting ready to sell his laptop so he’ll at least have some money to take care of his loved ones.

Families like his are feeling the impact now—there’s no lag time to this embargo. It’s a sobering reminder that whichever side you fall on, it’s never just politics. It’s about people who are at risk of becoming pawns in a prolonged struggle for power.

Globally, very few people are paying attention to the situation in Iraq right now. Thank you for seeing what others choose to ignore. We’ll continue to keep you updated on developments here.