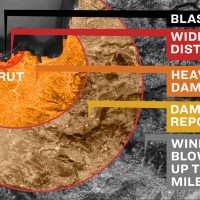 Around 6pm local time on August 4, a blast occurred at the main commercial docks in Beirut, Lebanon. Following the explosion, a tall plume of crimson smoke cut through the sky, so striking that it seems it was captured by almost every cell phone in Beirut.

A second, much more devastating blast followed, sending shock waves over 15 miles, crushing cars, blowing out windows and glass-front buildings, and sending rubble flying. The explosions were strong enough to be felt in Cyprus, 150 miles away, and were picked up by earthquake measuring devices.

This cataclysmic event has left the country reeling. At the time of this post, families are still finding wounded and dead loved ones amongst flattened port-side buildings.

And it couldn’t have happened at a worse time. Lebanon was reeling from more than one crisis even before the blasts.

Lebanon has been mired in turmoil for years. But last October, when the government proposed new taxes for gas, tobacco, and voice calls made on apps like FaceTime and WhatsApp, residents weren’t having it. They poured onto the streets in protests that shook the government and emboldened the Lebanese people.

These initial protests unleashed long-brewing anger over a wide range of issues: corruption, a lack of political transparency, a stagnant economy, high unemployment, and limited public services like electricity and water.

“By the end of the year, we will see 75 percent of the population on food handouts, but the question is whether there will be food to hand out.”

The protests, which are ongoing, were not empty complaints. The currency in Lebanon has collapsed, devalued by 85%. Food inflation has risen 250%. And the COVID-19 pandemic has only accelerated unemployment. In June, the cost of bread, a daily staple, skyrocketed, triggering further anti-government protests.

Frequent power outages, caused by shortages of imported fuel needed to run power plants, has made life and business almost impossible. In the 1950s and 60s, Lebanon was known as “the Switzerland of the Middle East,” yet it hasn’t had stable, 24-hour electricity since 1975.

More recently, there has been widespread fear of famine. Poverty and hunger rates were already over 50 percent before the blasts. “By the end of the year, we will see 75 percent of the population on food handouts, but the question is whether there will be food to hand out,” said Martin Keulertz, Assistant Professor in the Food Security Programme at the American University of Beirut.

As recently as August 3, a day before the explosions, Lebanon’s foreign minister resigned, in response to growing fears the country is becoming a failed state.

2. The Spillover From Syria’s Civil War

Lebanon and Syria have always been closely linked. Syria used to be an important market for Lebanese exports. It’s not surprising that after a decade of war, Syria is not the same partner it used to be.

The war just over border has certainly dampened trade, but sanctions coming from the Caesar Act, implemented by the US government in June 2020, were like a bucket of ice water dumped on an already fragile economy, further deterring trade. International businesses, including those in Lebanon, face crippling repercussions if the US government decides they benefit the Syrian government in any way—which can be quite subjective.

Lebanon has been a gateway to Syria for large aid organizations. Lebanese banks provided a way to get funds, and the relative safety of Beirut made it a suitable base for international staff—but that was before COVID-19.

There are roughly 1.5 million refugees in Lebanon—that’s a quarter of the entire population. Lebanon has hosted these families for years. Nearly 300,000 of them are Palestinians, who can’t return home because of ongoing violence and policy disputes in Israel/Palestine.

Most of the refugees are Syrian, and there has been growing pressure to force them to return home, even though it’s anything but safe to do so. Nearly 80 percent of Syrian refugees don’t have legal residency, which means they can’t safely cross in-country checkpoints. For Syrian refugees living in the vicinity of the blast zone, they are stuck in neighborhoods that are utterly destroyed, much like the homes they fled in the first place.

With the explosions at the port, every ongoing crisis has exponentially worsened. At least 100 people were killed in the blasts, and upwards of 4,000 injured (at the time of this post) and 300,000 people are now homeless. Thousands of families living in the impact radius are now displaced, their homes destroyed.

Food will be even harder to come by, as the shipment of imported goods will have to shift north to Tripoli, and new transportation routes will need to be developed fast.

Jobs, already more scarce because of COVID-19, will be even more so, as so many businesses in and around the busy port were destroyed.

Lebanese families are already helping each other. Immediately after the blasts, they took to social media to offer neighbors meals and places to stay. Hotels and restaurants opened their doors for free to those in need. The local community is taking care of its own people.

But they don’t have the resources to do this long term.

Our team in Beirut set into motion the moment the blasts happened, prepping to respond to both immediate and long-term needs. We are listening to our local neighbors and partners to determine the most effective, most immediate response.

To start, we’re mobilizing now to provide emergency food, and we’ll have more about how that’s coming together soon. But we need you to go with us.

We will stand with our friends in Lebanon in the immediate aftermath of this crisis and for as long as it takes to rebuild. Will you join us?

I want to give to help families in Beirut.