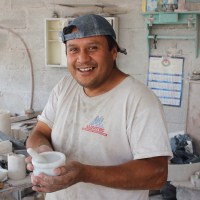 We arrive in Tecali one day in April—this town of white streets and white dust not far from Mexico City. The owner of a small marble shop talks about this place, where generations have worked on marble, cutting and polishing the stone to create both art and useful objects. “Most of the community that lives here works on the marble,” she says.

The owner brings us to an open workshop covered in white dust where her son works. Osvaldo is a man in his 30s who has worked with marble since he was 10. As a young child, he trailed after his father in this same workshop and decided to follow in his steps. Now, Osvaldo creates beautiful pieces as a maker in our Preemptive Love community, and we help him sell his art around the world.

On shelves around his workshop, we see examples: shining animal figurines, bathroom accessory sets, delicate earrings, and bold mirror frames. Osvaldo says that his body rests and is at peace while he works with the marble.

“I love to see the colors of the stone,” he says. “Before, I worked with stone from Zacatecas; it was a very pretty color.”

He wishes he could keep some of the rare ones, knowing he might not see anything similar again.

Changing the Story in Tecali

According to Osvaldo, more than half of his neighbors work on marble in small workshops scattered across the town. All the artisans harbor “trade secrets” about their methods, yet it’s common to ask a neighbor for advice and help, especially with big orders. “A neighbor came the other day and asked me how many bottle stoppers I could produce because he had to deliver many,” Osvaldo says. “He also visited other workshops.”

But Tecali is more than a sleepy, quiet town of congenial artisans. We’d also tried to visit Osvaldo’s shop the day before, but the streets were closed. The community itself had taken that step, Osvaldo’s mother told us, to defend against violence. Thieves frequently target buses—taking everyone’s cell phones and the drivers’ cash. “Last time,” she says, “a driver refused to give the money and the thieves almost killed him.”

After hearing the rumors of yet another robbery, the habitants closed the streets to force the bus to stop. “People here are tired of this,” Osvaldo’s mother continues. “Yesterday, as soon as the community knew that a robbery was happening, they closed the street. The people detained two of the four thieves and waited for the authorities.”

Robbery is not the only kind of crime in Tecali. Officials reported more than 50 cases of domestic violence since last year and at least six murders involving torture.

All across Mexico, Preemptive Love communities of makers face violence in their daily lives. In the mountains of Simojovel, Chiapas, where our makers cut and polish amber, locals formed an armed posse to oppose the criminal group Los Diablos. In Sierra Tarahumara, Chihuahua, where our makers produce beautiful baskets, cartels try to force our friends to plant opium poppies or marijuana, smuggle drugs to the US, or join the cartels.

For Preemptive Love, supporting our makers means providing them the means so they are not economically forced to engage in crime—so they have another choice. It means helping these communities prevent or denounce crimes and also care for each other so that they recover more quickly after violent and traumatic events.

Osvaldo begins creating one of his favorite pieces right before our eyes: a black marble sphere. He starts with a small, black marble cube, then cuts it, getting a figure similar to a ball. Then he polishes it—once, to give it a uniform shape, and a second time to make it shine. Finally, he washes it with water and acid and cleans it. Twenty minutes after starting, he offers it to us as a gift.

Most of the products Osvaldo creates for the Preemptive Love shop take much longer to perfect: coasters, mortar and pestle sets, and salt cellars. “No product is the same as another,” he says, citing the different marble veins in each piece. “Producing in this workshop is not the same as producing in a factory. Every object is different.”

Osvaldo hopes to one day share his work with his sons—now only ages 1 and 2—in case one of them might wish to follow in his steps and in the steps of his father. For now, he concentrates on putting a part of his time and his life into each piece he creates.

In the same way, embedded into every piece of Tecali marble art, from every local artisan, lie the lessons and “secrets” that this community in Mexico has conveyed from generation to generation.

Buy one of Osvaldo’s creations here (delicious guacamole not included). Cartels have a violent future in mind for Osvaldo and his neighbors. Help his community to change the story, to one of well-earned prosperity instead of violence.