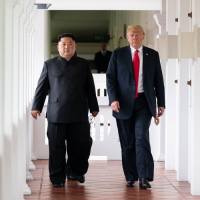 Leading up to the Singapore summit between President Donald Trump and North Korean leader Kim Jong-un, I suffered relentless waves of emotion. Doubt and fear and trepidation mixed with a weirdly giddy sense of anticipation. Inexplicably, a sprinkling of hope.

And in the aftermath, I scrolled slowly through Facebook posts of friends and the shared posts of strangers, and I watched as people I love and respect divided into factions—in some cases, shouting at each other.

There was Team “Kim’s a Monster,” Team “Trump’s a Monster,” and Team “They’re All Monsters,” none of whom thought this unexpected accord was a moment to celebrate.

I’d really love to bestow you with some bit of wisdom, but frankly I’m stumped myself.

I am often filled with doubt when it comes to politicians and their motives. I see some of them speak well, sensibly, and with what looks like pure motives. But I also see the erosion from special interest groups and lobbyists. Or the damage that comes with time—the fatigue of throwing yourself at walls you’ll probably never break through.

When I find myself filled with doubt, I like to dream of the what-ifs.

What if the people we think of as “evil” aren’t impossible to redeem?

What if they aren’t doomed to never change? I like to think it’s possible that in one moment, there can be a turn in the path—one moment where there is an epiphany, a shift of the light.

I knew a woman who was relentlessly hard-hearted. Everyone who knew her had given up on her, because every conversation felt like it was designed to cut you to the bone.

For decades I watched her spew hate and venom, watched her circle of friends and family slowly disintegrate until all that was left were the two most die-hard people in her life, who she had also alienated—yet they persisted in loving her, despite herself.

They chose to be kind and to love, no matter how terribly she treated them.

I saw her eventual transformation and was there the day she said “I love you” to someone she had known for 30 years, someone she’d never been vulnerable with. I saw the walls between her and the world tumble down.

There was the turn in the path… it was moving and unforgettable.

We don’t know when these moments will come or who will have a hand in helping create them. So I say go with the what-ifs, and let’s continue to love as best we can.

Maybe it will not change Donald Trump or Kim Jong-un or any other politician. But it might change us. It might inspire our friends. Or a stranger on the internet who, in turn, shows kindness to a stranger on the subway or buys a meal for a homeless man or any number of ways we can show love to another wayfarer navigating alongside us.

Change doesn’t always trickle down from the top. Sometimes it rises like a geyser from below.