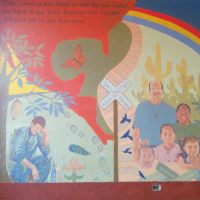 Ixtepec City, near the southern Mexican border, is a hub for migrants, refugees, and asylum seekers as they flee Central America and move toward the US.

Here, the Hermanos en el Camino (Brothers on the Road) shelter offers a resting place for travelers. Located in one of the poorest and most dangerous parts of Mexico, the shelter is a refuge of safety and provision. Migrants used to arrive on top of trains cars, but since 2014 they’ve been arriving by foot. On their journey to Ixtepec, they face incredible dangers—being robbed, assaulted, raped, kidnapped, or killed.

From here, most migrants move on to Veracruz, a hub for gangs and drug cartels. Veracruz averages 4.5 murders per day, along with over 50 kidnappings every month. The Hermanos en el Camino registers and photographs migrants, so if they go missing on the journey, family members will know they made it at least as far as Ixtepec.

Founded by Father Alejandro Solalinde Guerra, the shelter strives to provide humanitarian aid and protections. They offer food and shelter, along with medical, psychological, and legal help. They provide resources to migrants, so they know their rights, and tries to equip them for the safest journey possible. Since its founding in 2007, the shelter has served roughly 20,000 migrants, refugees, and asylum seekers.

Father Alejandro greets travelers as they arrive, reassuring them of their safety at the shelter, bringing them in for food and rest. He recognizes the journey this far might have been harrowing; the journey ahead will be even more so.

Father Alejandro serves because he believes all deserve to be treated as people, that all deserve to be taken care of, their human rights defended. He notes that most refugees, migrants, and asylum seekers face extra challenges because, “rather than being seen as people, they are seen as merchandise. Because we live in a world where the human being doesn’t matter… Any one of us can be kidnapped, but the difference between them and us, is no one will look for them, no one will complain.”

More than 1,500 miles north, in El Paso, Texas, on the northern border of Mexico, our friends have been running a shelter similar to the Hermanos en el Camino. Here, asylum seekers are welcomed and cared for once they’re released from ICE detainment.

For months our friends have been providing this care, but their resources are rapidly running out. They need our help so they can keep showing up, keep welcoming and helping.

We’re rushing 10,000 emergency backpacks here, so asylum seekers have the essentials they need, like toiletries, underwear, socks, and snacks. Your donation allows us to fill a backpack and distribute it to families in need.

Asylum seekers should be treated with dignity at every stage of their journey. Father Alejandro is working to provide the care they need early in their journey. We can help provide that same care as they reach our borders.

Will you stand with asylum seekers? Will you, like Father Alejandro, see them as people, as human beings who matter, who are worth looking after?

Stand in the gap for asylum seekers. Give now.