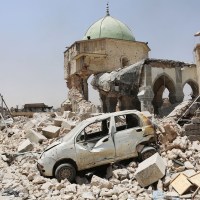 You’ve heard of ISIS on the news. You’ve probably heard of their horrific violence. But who is ISIS and how were they formed? What exactly were they fighting for and what’s happening with ISIS now.

Here’s what you need to know:

ISIS—the Islamic State of Iraq and Greater Syria—is the extreme offshoot of Al-Qaeda, the terrorist organization that attacked New York and Washington D.C. in 2001, sparking a global war on terror. ISIS follows an ultra-conservative branch of Islam which believes that returning Muslim society to the time of the Prophet Mohammed in all aspects of life—from theology to social values to governance—is the purest form of Islam.

When was ISIS formed?

ISIS began in 1999 as a small Iraqi insurgent group. But you probably didn’t hear about them until 2014, when they declared themselves a caliphate and waged war across Iraq and Syria. From 2014 to 2017, ISIS grew and expanded, both in their claim on territory and in the terror they incited both in the Middle East and around the world.

Is ISIS Sunni or Shia?

ISIS follows an extreme form of Sunni Islam, but most Muslims of every background—including Sunnis—have denounced the group. The militant group specifically targeted Shia Muslims for persecution, alongside religious minorities. Many of those displaced or killed during the rise of ISIS and the war against them were Sunni. ISIS strictly adheres to their ideology over what most Muslims regard as a true expression of their faith. The extremist group pursues its goals single-mindedly, even when they come in direct opposition to their faith (Sunni Muslim).

What is ISIS fighting for?

The brutality that we associate with ISIS—beheadings, slavery, amputation, stonings, torture, etc.—comes from a desire to wage holy war, or jihad, against the “enemies of Islam.” Anyone who doesn’t follow their extreme brand of Islam is an enemy of ISIS.

Shia Muslims are ISIS’s primary targets, which may come as a surprise to many non-Muslims. Sunnis and Shias have been fighting for generations, and the rise of ISIS is seen, among other things, as the latest symptom of this terrible sectarian split.

No other religious groups are spared persecution, though. Shabaks, Alawites, Jews, and Christians have suffered greatly under ISIS. And the Yazidis have suffered the worst. Branded as “devil worshippers,” ISIS waged genocide against the Yazidi people, torturing and killing thousands of men, and capturing and subjecting women and girls to repeated rape, beatings, and slavery. More than half the total estimated global population of Yazidis remain displaced within Iraq, and thousands still remain in ISIS’s captivity. Sinjar, the Yazidi home, and its surrounding area are still occupied by different armed groups vying for control.

The #Yazidi genocide is ongoing. Here's a look at the impact of #ISIS 's targeted campaigns against them: pic.twitter.com/87z3WVE8Vj

ISIS is also famously savvy at using modern media to get its message out. Social platforms have been incredibly useful in radicalizing and recruiting young people from all over the world.

According to a July 2018 report, over 40,000 foreigners from 110 countries have joined ISIS in Iraq and Syria—80% of them are men, with the remaining numbers being made up of women and children equally.

Unsurprisingly, many foreign fighters who joined ISIS are disaffected young men with criminal or radical religious leanings, drawn to the glory of battle victory, whether for the thrill of the fight or for deeper motivations to help their religious brethren or to seek revenge against repression. ISIS draws in the misfits and marginalized, promising belonging, identities, and status.

Online recruitment has also meant that ISIS is able to reach young women in the privacy of their homes, such as Shamima Begum from Britain, and American Hoda Muthana, luring them in with the promise of a greater mission and meaning.

People from all over the world made their way to Syria for ISIS, in support of its ultimate goal: to establish a caliphate.

What is a caliphate?

A caliphate is a political-religious state made up of the Muslim community and the people and lands under it. The first caliphate arose after the death of the Prophet Mohammed in 632 AD.

The caliph, the religious and civil ruler, has supreme authority over all subjects of the caliphate. The word caliph comes from khalīfah in Arabic, which means “successor.” The caliph is considered a religious successor to the Prophet, not unlike the way in which Roman Catholics consider each pope to be the successor of Saint Peter.

ISIS’s caliphate, which stretched across Syria and Iraq, shared many features of a modern nation-state, including

Initially, at least ISIS proved effective in providing state-run services like the government before it did.

But a caliphate cannot exist without land, as the caliph needs physical boundaries in which to enforce Islamic law. More practically, territory also allowed ISIS to accumulate enormous wealth from a diverse set of resources. The seven or eight million people that lived in the caliphate that ISIS built provided it with substantial taxes and labor. From agriculture to oil, ISIS controlled not only the resources within the caliphate, but many of the supply lines that ran in and out of its territory.

In July 2017, ISIS lost its claim on Mosul, the largest city under its control. ISIS continued to lose territory and power until March 2019, when ISIS lost its last significant stronghold in Syria, Baghouz.

It’s been declared numerous times over the years as ISIS’s power has diminished and waned: the caliphate has fallen, ISIS is defeated. Governments are declaring victory. After years of brutal fighting, the caliphate which covered vast swathes of Iraq and Syria at its peak, is no more.

Losing the caliphate means losing this land and all the wealth that its resources generated, so taking back territory that it has claimed is a legitimate victory.

However, taking back territory is only one victory.

What happens to ISIS now?

Five years of prolonged fighting have depleted ISIS’s strength, but it has faced these odds before.

In 2010, after the US pulled out of Iraq and left ISIS hobbling, with only several hundred fighters left. Yet it regrouped and came back.

There were echoes of 2010 in late 2017, when a “final defeat” was claimed after Raqqa—ISIS’s de-facto capital in Syria—fell to American-backed, Kurdish-led forces.

It was a major win. But it wasn’t a defeat. ISIS never left Iraq. It’s still here, and it still has plenty of money.

In 2018, mere months after Iraqi officials declared the last “victory,” ISIS carried out insurgent attacks across the country—small-scale violence designed to intimidate communities still devastated by war. With a lack of resources to rebuild, conditions are still ripe for extremism and violence to thrive.

Dismantling the territory that ISIS claimed as a caliphate has not dampened the commitment to its ideology. If this incarnation of ISIS fails, then it will adapt and reform under a different guise, around the same desire: to build a caliphate, reviving what its adherents see as the golden age of Islam, and initiating what it believes is the countdown to the apocalypse.

The impending Day of Judgment is an anchor in the group’s ideology. ISIS believes that the role of a good Muslim is to sacrifice his or her life in service to the caliphate, to prepare the world for its last days, and receive rewards for devotion in the afterlife.

What happens to the children and wives of ISIS fighters now?

Even as the wives and children of ISIS fighters streamed out of the last remnant of the caliphate in early 2019—ordered to leave so they would not impede the fighting—some remained defiant. Many expressed a belief that the caliphate will rise again.

They made their way to a refugee camp in northern Syria, where conditions are at crisis point. More than 40,000 people arrived at al-Hawl as the final assault took place. Unprepared for the enormous influx of women and children, there is a disastrous lack of medical care and food, as supplies from aid agencies are delayed by lack of security on the road.

Within camps, the situation for families is dire. Families of ISIS fighters have been shunned by communities as tribal law stigmatizes extremist links, even if the family members themselves did not support the group. They have found it difficult to get registered in camps like the one at al-Hawl, Syria. Their ability to work, feed, and care for their children is restricted.

Complicating this situation, there are reports of female ISIS members recreating the harsh rules of the caliphate among their communities, adding to suspicions of ISIS sleeper cells inside the displacement camps.

As resources are stretched painfully thin, as much of the world moves on from Iraq and Syria, and as community divisions continue to make difficult circumstances more complex, it is the children who suffer the most. In addition to the scarcity of food and medical care, large numbers of children are being taken away by government authorities and tortured for information and imprisoned, whether or not they have had anything to do with their jihadist fathers or extremist ideology.

Traumatized by war and the subsequent treatment at the hands of authorities, these children badly need programs to help them process what they have been through, discard the ideology they were brainwashed with, and reintegrate them into the communities they must now live in.

For any child, having access to education is key to changing their life, giving them better options than poverty or war. For children of ISIS fighters, their education and care is vital to preventing the next war.

It’s hard enough trying to rebuild home when war has taken everything from you. It’s harder still being a woman trying to provide for your family when your options are limited because of your gender. Or when you’re a child who lost family and home to violence, growing up without the stability that is the basis of a successful and happy life.

For the children of ISIS fighters, all of this is topped by the stigma of being the child of parents that the community considers evil.

In this region, community is everything. Without family and social links that define so much of life in the Middle East, children grow up isolated and vulnerable to exploitation and radicalization—the very circumstances that seeded so much of ISIS’s growth.

An entire generation of young people in Iraq has grown up knowing nothing but war. They have never known what it is like to have peace. For them, the end of the caliphate is just another event in a cycle of violence that even now, is continuing without pause.

ISIS when you were 44

If you still can function by now mentally and physically.

You deserve a Nobel prize.

We’re staying in Iraq and Syria to help our friends to rebuild. Because the work is not done, and you understand that too well. You know that one military win is not a victory for the millions of people who have been scarred by terror, and are at risk of more.

Only when their homes are remade and peace is restored, will we all be able to say that evil is defeated. Together we can help our brothers and sisters in Iraq and Syria rebuild.

Help our brothers and sisters remake home—and prevent the next war from happening.