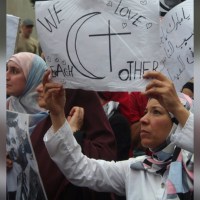 We’ve told this story before.

In the Philippines earlier this month, a group of Muslims surrounded a Christian church—in order to protect it.

They linked arms with their Christian neighbors to surround the sanctuary as congregants worshiped inside. “We are here to guard the church,” one said.

It was more than a token gesture of interfaith cooperation. A decades-long insurgency has pitted Muslim rebels in this part of the Philippines against Christians who are largely loyal to the government.

Just days prior to this striking act of solidarity, 20 people were killed when a militant group loyal to ISIS bombed a Catholic cathedral.

“[We] are willing to sacrifice life to protect our Christian friends,” said one of the Muslims who showed up at the church. “We will do it every Sunday for Christians and every Friday for Muslims.”

The significance of the act was not lost on worshippers inside, some of whom said they would not have come to church without protection. “I am glad they are here,” one said. “It gives everyone the feeling of security.”

This story is hardly original.

Three years ago, we shared about the 200 Muslim men in Nigeria who risked their lives to protect Christian worshippers on Christmas Day, in the shadow of Boko Haram, who rivaled ISIS at its peak as one of the world’s deadliest terror groups.

There was Salah Farah, who gave his life protecting Christians after militants in Kenya attacked a bus and tried to separate the Christians on board from the Muslims. Farah, a Muslim on the bus that day, told the militants, “Kill us together, or leave us alone.” He was shot multiple times and died in surgery.

There was our Muslim friend Marwan, who was so grieved when he saw how ISIS had desecrated a church in Mosul, Iraq, that he fashioned a cross out of two pieces of metal—a message to any Christians who might return that they were welcome here.

There was the Christmas service outside Mosul a few months ago, where Muslims greeted their Christian neighbors afterward with flowers, music, and balloons.

We keep telling these stories because they matter.

Because they are not unusually heroic outliers. They are not the exception to the rule.

These stories are more common than you might think, precisely because the people in them—whoever it is you might view as “the other”—they are more human than you think.

They are more capable of sacrificial love.

They are more than the caricature that we’ve chosen to believe.

There is more to them than we often see.

And that is why their stories are worth telling. Through their actions, they choose to create a different kind of world. May we have eyes to see it.