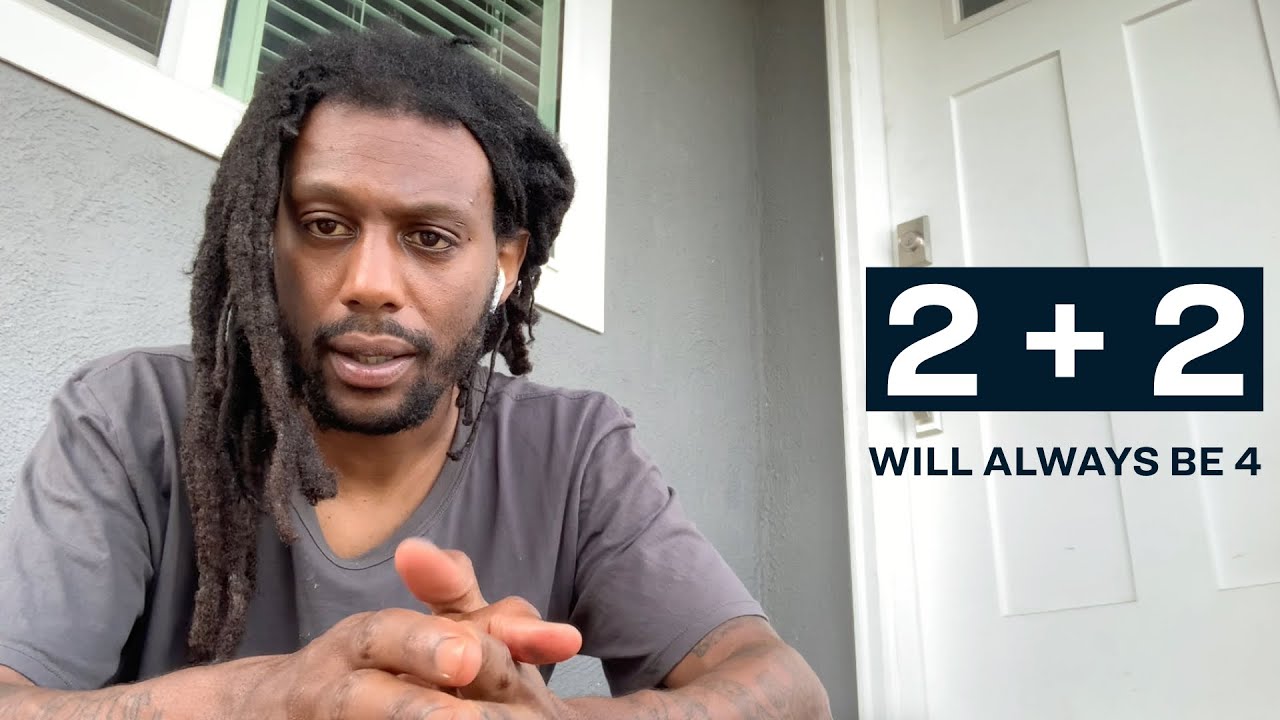 However, I think I understand how a rational person could love it. It’s the elegance and simplicity of it. The symmetry, the beauty in pattern and predictability. If the solution to any equation is incorrect it’s because the numbers are arranged wrong. All you have to do is rework the numbers and it will invariably draw the correct answer.

Of course, this whole analogy falls apart when you get up to calculus, quantum physics, and irrational numbers. But for the sake of this metaphor I’m talking about, let’s stick with arithmetic.

I guess if you want, you can feel some type of way about four. Maybe four is not what you were looking for, so you might feel a little anger at four. Maybe you’re trying to understand four, why four is what it is. Maybe do some deep analysis of four. Have debates about four. But four is just a product of two and two.

If you really want to understand four, talk to two and two. If you do not want four, simply stop combining two and two. It’s ridiculous to condemn four for being the product of two and two.

You can do your own googles. Every inner-city riot involving the black community—spanning back to Watts, Detroit, Chicago, both LA riots, and Ferguson—invariably came as a direct response to police brutality. Continual injustices being perpetuated on the black community with no recourse or hope for justice from the government.

It’s simple math—a long history of lack of resources, institutional racism, coupled with unrequited violence toward the communities by the people who were charged to protect them.

History continues to rhyme. There really is no nuance.

I don’t know why America thinks it’s any different than every other country on the planet. American can and has once already failed as a state, just like every other country and state. What we should be learning is that society only works if the citizens want it to.

If you think American won’t release its military on itself—just like Syria, Iraq, Iran, Venezuela or any other country—you’re not paying attention. We absolutely can get tied in decades of civil war. As a matter of fact, if you’re a person of color here, you’ve been in a war the whole time. As a matter of fact, there are factions of our citizens that already started a war.

We think Syria isn’t us. Family, beloved: there’s no nuance in math. It’s 2+2. It always works.

It also shouldn’t be missed on us Americans, that from 3rd grade, 5th grade, 8th grade, and 11th grade, which are your American history classes, the lesson we learn is that the nation itself was founded by violence. An uprising against tyranny. Virtually every statue you see in a city plaza, every person learned of and celebrated, every quiz you took, was a monument to war.

Let us not forget: the day after Dr. King was assassinated, the nation had riots in every major city—110 cities, to be exact, causing $47 million in damages. It lasted for 6 days and on the 6th day, the Civil Rights Act of 1968 was passed.

Apparently our nation understands violence very well. It’s time we look at ourselves in the mirror and just accept that we are a violent culture. Our founding is violence. We violently created and enforced slave labor. We violently removed the indigenous. We violently suppress uprisings. And we violently coil immigration.

What is more American, more patriotic than a man with his rifle, standing on his land, defending his family, waving his American flag? We solve geopolitical issues with violence or the threat thereof. We entertain ourselves with violence. Then, in the most dizzying act of cognitive dissonance, we condemn violence when we feel like it’s toward us.

So to echo the words of Dr. King when he spoke about the Watts riots, expressing how Watts was already a powder keg due to the continual injustices perpetrated on the black people of Compton and Watts—he says he doesn’t condone rioting, but he understands it. It is “the language of the unheard.”

I cannot condemn the acts of the citizens of Watts without condemning the ingredients that caused the eruption. In other words, you can’t get mad at four for being what 2+2 equals. Your issue is not with four. Your issue is with two and two.

This is what justice work is about. This is why I ride with Preemptive Love. I’m not here to talk about riots—don’t even ask me about them. They are just the sum of two and two. I’m really only interested in discussing two and two. Let’s put our heads together to change the equation.

To wrap this up, I appeal to the writings of the Christian gospels, specifically the story of the good Samaritan. Jesus, as any brilliant storyteller knows to do, purposefully identified this man as Samaritan to address the deeply-held prejudices the ancient Hebrews had towards them. He is the example of what it means to serve others in need, despite your relation, or lack thereof, to a person in need.

But can I push you higher? Here’s my question:

It’s good to serve a man who got robbed. But when are you going to address why so much madness happens here in the first place?