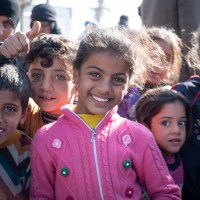 As of mid-2021, 84 million people have been displaced worldwide, of which 26.6 million are refugees. When we hear the word refugee, various pictures come to mind. Women holding barefoot children, rocky, desolate soil, rows and rows of tents. How much of what we think we know comes from Hollywood films, our assumptions, or facts? There are many myths about refugee life in a camp.

1. Refugees live in camps, and all camps are run the same way.

Places where refugees reside are often referred to as camps, but the term is generic. In reality, there are camps, settlements, and self-settlements, and each category receives different amounts of support from international aid organizations.

A camp is built for refugees and administered by the United Nations High Commission for Refugees (UNHCR) and/or a host government. Food, water, shelter, and medical assistance are immediately provided by implementing partners (for example, the Red Cross). In situations of long-term displacement, services are added to provide for education and build livelihoods. Building materials are brought into the camp to make shelters more durable.

In a settlement, a group of refugees are given permission to settle on a piece of land to create a self-sustaining community. Therefore, people living in settlements are not administered by UNHCR and they receive less relief aid than people living in camps. Theoretically, refugees in settlements have more freedom of movement and more say in decision making, but in reality, conditions differ from settlement to settlement and country to country. The host country makes the rules regarding refugees’ ability to work or move freely in and out of the surrounding communities.

In self-settlements, refugees are often on their own. They set up their own accommodations, which are often substandard for living. Because they do not have legal refugee status in the host country, they work illegally and are vulnerable to employment abuse. The aid they receive is often from local families or local community organizations. 60% of the global refugee population is self-settled in urban areas, not camps.

2. Refugee camps are like welfare states—refugees have their basic needs covered.

Although refugees living in UNHCR administered camps receive food, clothing, water, and shelter immediately after an emergency happens, they do not have their basic needs met throughout their displacement, especially when an emergency turns into a long-term displacement. UNHCR coordinates relief, but other aid organizations such as the World Food Program provide it. When funding dries up or UNHCR moves on to the next crisis, it is up to other aid organizations to cover financial gaps. If they don’t, refugees go without essentials unless they have money to buy them.

Relief aid does not cover all a person’s basic needs. For example, food aid is a vague term. If food aid is administered in a camp, it doesn’t mean people receive three meals a day. They may only receive one hot meal per day. If funding is scarce or the camp becomes overcrowded, food rations are further cut. There may not be baby formula for newborns.

Refugees may receive food packs but not the means to prepare the food. Not all camps have cooking facilities, which depends on how a camp was set up or how old it is. Some refugees need to supply their own firewood or gas to cook food, and they may not have the money to buy it.

In addition, clean water is not always provided or accessible, nor are all medical services. When healthcare is provided, it often does not cover special prescriptions or treatments. Again, refugees living in camps need private money to take care of these essentials.

Refugees living in settlements receive less relief aid than refugees living in camps. Settlements opened on private land are for-profit businesses. In a refugee settlement we are currently serving in Lebanon, refugees have to pay for supplies and labor for someone to build their tents. Tents are not given to them. Then, they pay a monthly rent for those tents. When tents tear during storms or when they flood, refugees need to pay for repairs. Refugees also have to pay a subscription fee to use a settlement’s generator for electricity, a water bill, pay for gas for stoves (if a person has one in his tent), and a router for internet connectivity.

Many settlements do not have schools for refugee children, and the surrounding public schools often lack the capacity to take in more students. There may also be a language barrier if refugees and the host community do not speak the same language.

Depending on which country hosts a settlement, refugees may or may not be permitted to leave the settlement to find work. In the Lebanese settlement in which we serve, Syrian refugees are allowed to leave the settlement if they have proper papers. They are allowed to legally work if they have a permit, which is too expensive for many to afford. The only other option for legal work is to find a sponsor. As a result, many refugees work in the informal economy as day laborers, trash pickers, or field workers.

Some host countries make settlement life difficult for refugees to incentivize their leaving, which they often can’t because they have nowhere to go.

The belief that refugee camps are temporary is the creation myth of the international refugee response strategy. Refugees have to wait in camps until they can return home, are allowed to integrate into the host country, or can be resettled. The average stay is 17 years. Depending on where a camp is located, that means seventeen years of not leaving the camp without a special pass, not having a paid job, and not having the opportunity for higher education. It’s years of living in temporary housing with temporary water taps and bussed in food. It is life interrupted and frozen in time.

Displaced people, no matter if they are living in camps, settlements, or self-settlements need help so they can go from dependence to dignity. Learn more about refugee lives and our work.