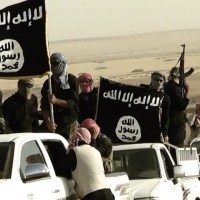 No, how could we ever be like ISIS? They are evil. They are monsters. We have absolutely nothing in common with them.

That’s what I’d prefer to believe, anyway. That distance separating me and my people from groups like ISIS makes me feel better. It makes for better sleep. It keeps things simple.

But if you spend time listening to captured ISIS fighters, if you study history, and if you listen to ISIS detainees and their families, you’ll hear a much more desperate, painful, complicated story.

Let me say this now and get it out of the way: nothing excuses the atrocities committed by ISIS fighters. I’ve seen the chemical attacks, the mass graves, and countless other nightmares wrought by ISIS. I’ve heard even worse. I’ve sat face-to-face with survivors of sexual enslavement, listening to their heart-wrenching first-hand accounts.

We have lived and worked in Iraq for nearly a decade, but these past few years of loving on the frontlines of this ISIS crisis—they’ve nearly broken us.

But how foolish would it be for us to not try and understand how we got here? To fail to ask: how did ISIS come to be in the first place?

At the very least, we seek to understand so we can do whatever it takes to keep it from happening again.

As you ask, however, beware of neat and tidy answers. It’s not just lazy, but also misleading to say something like, “Obama is the founder of ISIS,” or, “It’s all Bush’s fault.” If we really care about stopping extremist groups like ISIS—making sure they fail—we must go beyond politically expedient sound bites and look at the problem more deeply. We must consider the real people involved.

Why did so many people join ISIS? Here are a few reasons.

This may not be what you were expecting, but it’s a big reason why the entire region—especially Syria—is in upheaval. The years leading up to the civil war in Syria were marked by severe drought. Some ecologists called it Syria’s worst drought in a thousand years. The ensuing ecological crisis meant fewer resources for rural communities and greater scarcity of work. Farmers in central and eastern Syria suffered tremendously.

Hundreds of thousands—some estimates say millions—of families flooded into cities from the countryside looking for work. Tensions rose, which led to unrest, which led to protests, which led to arrests, which escalated into violence, and… you can probably guess the rest.

War. Years of it.

So when an extremist group once known as “Al Qaeda in Iraq” rolled in offering food, salaries, and a place where people could belong and have a voice, many jumped at the opportunity.

If it came down to feeding your family or starving, which would you choose? What would you do?

Few things are more important to us earthlings than the need to not feel alien—the need to belong. When a person feels disadvantaged, drowned out, or desperate, one of the most common options (among the few available to them) is to get loud, angry, and, in some cases, violent.

In Iraq and Syria, a perceived lack of representation or concern from their respective governments fueled precisely this sense of isolation. Sunni Muslims in both countries have felt underrepresented, bullied, and abused. So when a small group of underdog Sunni fighters ran a mostly-Shia military out of the city of Mosul in 2014, many cheered—liberation at last!

Few had even heard of ISIS or ISIL at that point; they were just glad to be rid of their oppressors. Today, the people of Mosul, Iraq, are eager to be rid of ISIS—the latest in what they see as a long line of oppressors. But they have to wonder: what will come next?

Is this just going to be the cycle, constantly shifting from one oppressive group to the next?

As for ISIS itself, many captured fighters say they’re glad to be done with it all. But there’s a recurring theme to many of their stories: they miss the camaraderie, even if they don’t miss all the bloodshed. They were brothers, friends who had each other’s backs.

In their own eyes, they were Luke Skywalker out to defeat the Empire. They were that unlikely cadre in Middle Earth, on a quest to destroy the ring of power.

Of course, their mission itself was misguided and the means of pursuing it were evil. But the brotherhood of it all—the belonging. That was powerful to them.

And you? If you were in someone else’s shoes, and you had to choose between joining this new, exciting group promising to free your people or an old oppressor who treated you terribly, which would you choose? Hindsight is 20/20, but at that moment, after all that Iraqis and Syrians had endured, ISIS was an easy choice for many.

ISIS is notorious for killing its own fighters. They extort, threaten, blackmail, and manipulate people into fighting for them. These tactics are on the rise as more and more militants quietly excuse themselves from ISIS’s ranks each night.

This little ISIS empire is shrinking and the pressure is on. ISIS leadership—consisting of the true-blue ideologues and Saddam’s ex-lieutenants—are growing increasingly desperate as soldiers mutiny, slip into fleeing crowds, or break away to join other extremist groups.

Letters are even surfacing from ISIS fighters apologizing and expressing regret for their actions in places like Fallujah and Mosul. The culture of force and violence is sending young men over the edge.

Of course, there are ISIS fighters who truly believe the group’s apocalyptic, extreme interpretations of Sunni Islam, but there are plenty of others who are just in this to survive. They truly have no options. They feel stuck. They despair—does this story only end in desperation and death? They keep fighting to make sure their families are fed and safe, in the hope their kids will survive this mess, even though they know they won’t.

The Definitive Guide to ISIS, the Cyle of Terror, and How We Can Stop It

So what would you do?

If someone had a gun to your mother’s head and said you had to fight? If someone kidnapped your children, or if your family was starving? If, after all this suffering, a jihadist came along and offered you a well-paying job as a soldier?

What if you’d grown up as a minority with next to no options? What if you’d been bullied, if you’d been told over and over, for as long as you can remember, that you are nothing, that you don’t belong, that your religious group should be deported? What if everyone else decided you were probably a terrorist and they didn’t need to spend any time with you to find out the truth?

It’s futile to ask you to imagine any of this because you probably—hopefully—can’t. I sure can’t. Forget trying to walk a mile in someone else’s shoes. We’d have to climb into their life, and we just can’t do that.

So instead I’ll go out on a limb and just say it: you would probably do the same as they did. You’d probably join ISIS, too.

If your children or your own life was at stake, you’d join. You’d go along. You might not want to. You might not become the guy beating his chest or beheading people on camera. But like most people, you’d probably do what it takes to survive.

All the violence and hate would likely suck your soul dry, as it has done to so many ISIS fighters. You’d probably hate a lot of it to your core, as many ISIS fighters do. But if you were faced with the same circumstances, chances are you’d be right there with them.

And so would I. Because at our core, we’re all fundamentally the same. We all have the same intrinsic, fear-based survival instincts that kick in when what we love most is at stake.

You and me and ISIS, we are connected. We belong to one another. We aren’t nearly as different as we might like to believe.

I had a professor in college—he was the only Jewish professor at our mid-sized Christian university—who taught a class called “Hitler and the Holocaust.”

Classes were held in this tiny little conference room in one of the oldest buildings on campus. The water fountains didn’t work, light bulbs were out; hardly anybody even used the building, as far as I could tell.

Instead of trying to endear students to himself, the professor began every lecture with a common refrain, and it made a lot of his students really angry. He would say: “We are the people in the gas chambers. We are the people operating the gas chambers. And unless you and I can truly come to terms with the fact that we aren’t different from the Nazis who incinerated all those Jews, nothing will change.”

Fewer and fewer students filled that tiny classroom as people dropped his class. For those of us who stuck around, it was infuriating, painful, even humiliating in its own way. We had spent most of our short lives being told that we’re smart, capable, good Christian kids—and then to have this eccentric scholar systematically strip that away and leave us feeling totally bare, un-superior in every way?

I wouldn’t trade it for anything.

It’s what you and I need, because assuming “those guys over there” are so utterly different from us is the first step to making them “less-than,” to dehumanizing them. And once a person isn’t quite as human as us, they become easier to ignore, hate, shoot, or bomb.

Unless we have the courage to consider this, to try to understand it, then all this terrible stuff we see around us—the anger, division, and violence—it just isn’t going to stop.