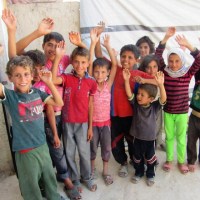 In the wake of April’s chemical attack, you showed up to let Syrian people caught in conflict know they are not forgotten. You had a remarkable response to that devastating news, even as you continued to provide for families in other parts of Syria.

While the news reports are often heartbreaking, we are not helpless to bring hope and relief. Here are four ways you showed up for war-torn families in Syria last month…

1. Responding to the chemical attack

In response to the chemical attack on April 4 that killed close to 100 people and displaced thousands, you helped launch a multi-phase response, reaching 2,400 families in the affected area.

In addition, 2,500 hygiene kits were given out, each containing items to clean skin and safely decontaminate homes. Finally, our team developed leaflets, posters, and a training program to teach people how to recognize a chemical attack—and how to react. Teams went into schools and clinics to give first aid demonstrations because like most of us, most Syrians have never had to survive a chemical attack before.

You continued to meet pressing needs in other parts Syria as well. Since late November, you’ve ensured that between 5,000 and 6,000 families get at least one hot meal each weekday. These families are in the countryside around Aleppo because they are either in transit to another city waiting for fighting in the area to die down. Because they have no kitchen facilities, this one cooked meal is the difference between being nourished and going hungry.

You are also giving them packages of fresh bread each week and a supplemental box of food and toiletries each month. The box contains ready-to-eat items like canned chicken and tuna, canned beans, and crackers. This combination is vital to ensure that each person receives their daily recommended calories.

As fighting dies down in some parts of Syria, displaced families travel back home and hold their breath to see what condition their houses will be in. Often the answer is shattering. The place that should bring comfort, safety, and memories is now stripped, burned, and riddled with bullet holes. Windows and doors are gone. All the belongings inside are ruined. But they are not alone in their disappointment. You are providing supplies and workmen to repair 53 homes in eastern Aleppo—one house at a time. Each recipient has a story of struggle and loss, and this assistance is an enormous source of comfort.

4. Dedicated team in the hard places

Our staff and partners in Syria are experiencing frightening things—attacks on checkpoints as they wait in line, gunshots and bombardments close by, roads suddenly closed because of attacks. Our team in Syria is taking every precaution possible in a war zone. But like you, they do not want to simply watch while needs go unmet.

As one of our team members said, “Don’t worry. I will finish my work as planned.”

Thank you for going to the front lines with him.