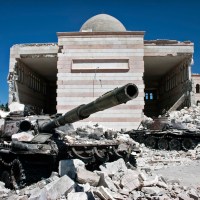 We’ve all heard the heartbreaking stories coming out of Syria. We were reminded of one of them during Sunday’s presidential debate, when moderator Martha Raddatz brought up five-year-old Omran Daqneesh, the little boy who was pulled from the rubble in Aleppo.

“But there are much worse images coming out of Aleppo every day,” Raddatz told candidates Donald Trump and Hillary Clinton. “In the past few weeks alone, 400 people have been killed, at least 100 of them children.”

It’s hard to get our heads around the sheer amount of devastation—the number of people killed, the number displaced. It’s hard to keep up with who is fighting who, and how it all started.

As the world wrestles with the same question put to both candidates last night—what would you do about Syria?—here are five things you need to know about the ancient, diverse, war-ravaged country…

1. Is Syria a Muslim country?

Broadly speaking, yes. Nearly 90% of the Syrian population identifies as Muslim. The vast majority are Sunni (70%), the balance are Shia—including a branch called Alawite, to which Syria’s president, Bashar al-Assad, belongs.

The rest of the population is made up of Christians, Druze, and a handful of smaller faith groups.

2. How long has Syria been at war?

The short answer is five years. The long answer—well, it’s complicated. There are functionally three separate wars happening in Syria, with dozens of armies and militias present, as well as a number of outside countries intervening:

They have taken refugees. Lots of them.

The Syrian refugee population is fluid, so exact numbers are difficult to determine. But around 11 million people have fled their homes—half of Syria’s entire population. Of those, 5 million have fled the country altogether, and around 90 percent of these families have taken refuge in neighboring countries:

To lend some context to these numbers, the United States has accepted roughly 12,000 Syrian refugees since the start of the war. Canada has resettled just over 31,000 as of late September. Other high-income countries, including Russia, Japan, and South Korea, reportedly haven’t admitted any Syrian refugees for resettlement.

The politics of refugee resettlement are complex and often divisive, as the recent US presidential debates have shown. A crisis of this magnitude resists simple answers. But one thing is clear: Syria’s neighbors have absorbed a jaw-dropping number of displaced families.

5. Why does Syria matter?

There are, of course, political reasons why Syria matters. The world is highly connected. Further violence in Syria can trigger instability in other Middle Eastern countries. Syria has become a remote battlefield on which other countries act out their aggressions—the United States versus Russia, for example. Also, Syrian opposition groups who see no future in Syria are vulnerable to further extremism—the worse things get, the more joining ISIS may look like a viable option to them.

But in the end, Syria matters because Syrians matter. Their lives and their dignity matter. The Syrian parents who want nothing more than to see their children grow up—they matter.

And that should be enough.