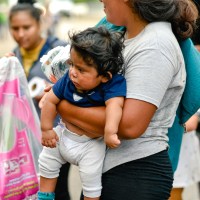 There are a couple of common responses that appear each time stories of asylum seekers and refugees make it into mainstream media. Some commenters express compassion for asylum seekers and refugees and gratitude for throwing light on their issues. Other commenters express compassion for those who live in destination countries where refugees are seeking asylum.

The world desperately needs the talents and passion that energize both groups.

Here is a response to some concerns about asylum seekers and refugees voiced in our own comments section, and an invitation to all who care about the well-being of our neighbors.

It’s a bit ironic, but the thousands of asylum seekers walking north from Tapachula, Mexico are desperately trying to make their claims legally. Unfortunately, the sheer number of people fleeing violence in places like Honduras, Haiti, and even as far away as the Democratic Republic of Congo has outpaced the government of Mexico’s ability to process in a reasonable amount of time. A process that was designed to take weeks, or up to a few months, can now take upwards of two years. At the same time, asylum seekers without official paperwork are unable to legally work.

The crowds walking from Tapachula are headed to the next regional center where they can apply for proper legal permissions. The crowds illustrate just how many people are sacrificing to make their claims legally, all while desperately trying to keep their children and themselves from starving to death.

Packed shelters all along the Mexico side of the US border also speak to the numbers of asylum seekers making claims through the legal process. The shelters are filled with asylum seekers patiently waiting to hear if their claims are successful, and then will cross the Mexico-US border legally.

Asylum seekers walking Mexico’s highway #200 out of Tapachula are running from violence, not bringing violence. 70% of those walkers are women and children, ranging from infants to those in their 70’s. They are fleeing violence in their homes and in their communities. They are desperately trying to protect themselves and their children, who have been raped, threatened by violent gangs and narcotraffickers to join them or be killed, or fallen victim to human trafficking rings. For the vast majority of asylum seekers, running for their lives was their only chance for survival. And sadly, the journey is so dangerous and the wait so long, that many are left vulnerable and again victimized in some of the same ways while working through the legal processes. The most unfortunate don’t survive the journey at all.

3. We hear that the United States has significant problems with homelessness, violence, and other needs already.

Yes! It does. Many would argue that the United States is in a crisis situation that requires all hands on deck. We would not dispute that.

It’s also true that the United States has approximately 1.8 million nonprofit organizations, charities, and foundations, with expenditures of $1.94 trillion (more than 5x the entire GDP of Haiti, Venezuela, Honduras, and El Salvador combined). They aren’t all focused on domestic issues though.

On Forbes Media’s list of top 100 charities in the United States, just organizations in the top 10 that focus on domestic needs raised $17.15 billion in revenue. And thankfully, “the nation’s top 100 charities reported a 10% increase in private donations during their most recently reported fiscal years.”

It’s great news that while so many people suffered during COVID-19 shutdowns and related financial crises, their neighbors found a way to increase giving.

Are there still unmet needs? Absolutely! But families walking through Mexico looking for a safe place to land, often after walking for months before they even reach the Mexican border, have no one standing with them. We’re choosing to do that—to love those others won’t. This has always been our posture. We’re very consistent on that point.

If you’re not already involved in creating solutions in the United States (or the UK, France, Australia, Canada, or countless other countries feeling pinched economically and socially) this is a perfect time to get involved. There are so many US organizations to choose from if you want to join established efforts. If you have sharp ideas that aren’t being tried, that you believe could address current problems, contact us. Seriously. If it’s outside our scope, we’ll help get you connected to an organization that can make great use of your time and talents.

And if you have the heart and capacity to help asylum seekers to stay home, let us know. If you think it’s important to help Haitians, Hondurans, El Salvadorans, and so many others be safe at home and want to invest there, contact us. We can help make that happen.