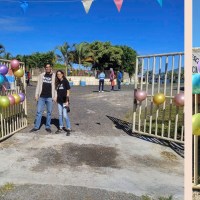 It’s that time of year: the morning air grows crisp and cool. Tree leaves turn into fireworks of yellow, burnt orange, and fire engine red. And kids, whether they want to or not, go back to school. This autumn ritual is one most of us are lucky enough to take for granted.

Families in Venezuela live a different reality. The economic devastation that has plagued Venezuela since 2014 has caused mass displacement, broken the health care system, and deepened food insecurity and malnutrition. A lesser-known repercussion is that it has caused an education crisis.

Many Venezuelan children missed out on learning during the pandemic due to poverty, food insecurity, and a lack of access to technology. Private school teachers held online classes, but in public schools, teachers sent homework to parents through the messaging app, WhatsApp. Public school students did their homework on paper and turned it in once a week. Public school students did not learn well with this system. Some who should not have passed were passed on paper, but they were unprepared knowledge-wise for the next level. They got so far behind, they failed or dropped out. Children of parents who could not afford phone credit or internet access could not access WhatsApp learning. They, too, got left behind and many eventually left school.

Public schools have limited space, so if students fail, they are not allowed to repeat the grade. The policy of not allowing students to repeat failed grades is a stop-gap for a larger crisis.

A Lack of Teachers

Would you work a full-time job for four dollars a month? That was the worth of the average monthly salary of public school teachers in Venezuela through most of the pandemic. You would have needed 156 monthly salaries of $4 to buy a month’s worth of basic food staples. Because the local currency is so volatile, producing hyperinflation, the central government raised the minimum monthly wage to the equivalent of  $27 in March 2022. This rate lasted until a few weeks ago when a currency devaluation brought the minimum monthly salary to a value of $16. A public school teacher’s salary is too low to support a family, so people have stopped becoming educators, and those who can go abroad in search of a better life. These factors have caused a teacher shortage.

Teachers and Students Can’t Get to School

Most Venezuelans, and especially those living in vulnerable communities, lack access to public transportation in their neighborhoods. Buses do not travel into these areas because the high hills and narrow streets make them difficult to access. The economic crisis has made it difficult for bus owners to afford spare parts if the buses break down and gas for the buses. Therefore, most public transportation available for these communities is by jeep, which is still too expensive for most local people. Likewise, most families cannot afford fuel for private cars if they are fortunate enough to own one.

Venezuelans facing acute food insecurity could number as high as 11 million in a country of about 28 million people. One-third of Venezuelan kids suffer from stunting, a lack of growth and development caused by malnutrition. Because most families cannot afford to eat three meals a day, parents encourage their children to sleep late in order to sleep through breakfast. When children arrive at school, they have more difficulty learning because they are hungry.

Post-pandemic, there has been a rise in gang activity, especially in vulnerable areas. Some gang members have more money and more power than some educated people, causing some youths to become skeptical of education. There is a perception that being in a gang will make a person more successful than going to school. Students think, “What’s the point?” and drop out.

How often do your own children ask you to explain a homework assignment? How many of their report cards are hanging by a magnet on the fridge? How often have your cheers of encouragement or words of support meant the difference between your children’s success or failure?

Now imagine you don’t live in the same house, neighborhood, city, state, region, or country as your kids. How would you supervise their learning, making sure they keep studying? This is the reality for many Venezuelan families. Necessity drives moms and dads from their country in search of work so they can send money home to those they’ve left behind. This money is vital for survival, but it doesn’t replace a warm hand on a child’s shoulder, telling them, “You can do this. I believe in you. I am so proud of you.”

As of 2020, nearly one million Venezuelan children had been left behind as parents were forced to go abroad to find work.

A Rise in Teen Pregnancy

Venezuela has the highest rate of teen pregnancy in South America. One factor driving the high rate of teen pregnancy is a lack of free contraception at Venezuelan health centers, which have been depleted by the crisis. Private health centers have contraception for sale, but a box of three condoms costs the same as a week’s minimum salary. Once these young mothers give birth, they drop out of school to care for their babies or, if they can find work, they drop out of school to take a job.

What do you say to 15-year-olds who cannot read well? How do you address acute low levels of literacy? Where do you find the teachers?

We’re Helping with Educators that Care

Thanks to our community of peacemakers, 80 kids do not have to abandon hope for the future. Working with a local partner, we are providing breakfast, lunch, and a snack to 80 students so they won’t be too hungry to learn. They won’t need to skip class just so they can skip a meal.

We’re also supporting the teachers who will give classes to these 80 kids. We’re supplementing their salaries so they can take better care of their own families while they shore up student knowledge gaps. Next year, after the students learn what they missed, they will be able to rejoin the formal public school system. And best of all, this is happening locally, meeting young people where they are, so no one has to leave.