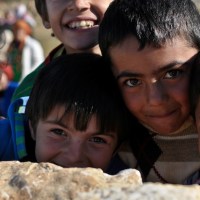 The situation in and around Aleppo continues to develop rapidly. Thousands are still in desperate need—and you are showing up for them. Here is the latest on our emergency response for Aleppo families…

1. Our emergency feeding program is continuing today, thanks to you.

For days, we’ve been serving hot, cooked meals for thousands of people in the Aleppo countryside. These are families who fled the city amid all the fighting.

Most of them fled with nothing. They are not in any kind of formal refugee camp, so they’re considered “transient” refugees—meaning they’re some of the most vulnerable people caught up in the world’s biggest refugee crisis.

That’s who you are serving right now. We are working hard to build out our program and provide for the thousands of new families that have arrived over the last few days. Already, your support has allowed us to double our Aleppo emergency response.

2. We’ve handed out thousands of sleeping bags to families who’ve been displaced, just as winter is about to begin.

The sleeping bags are made locally by other refugees—providing them with a vital source of income, while giving warmth and shelter to those who are fleeing now. Each sleeping bag is large enough to accommodate a mother and two children.

Tonight, the temperature is close to freezing. Snow is expected this weekend. For those with no other shelter and no source of heat, a simple sleeping bag can mean the difference between life and death.

“No one has ever told us they were cold in one of these sleeping bags,” our Aleppo response leader said today. “They’re very warm.”

3. We’re working with a coalition of partners inside Syria, in order to reach as many families as possible with lifesaving aid.

For almost a decade, “coalition” has been part of our DNA, not just our name. We are better when we serve together—across sectarian, religious, or national lines.

Whether it’s lifesaving medical care for kids in conflict zones, emergency aid for those trapped on the front lines against ISIS in Iraq, or food for those fleeing Aleppo right now—we work with locals who know the area, know the people, and know the needs.

This is the best way to ensure lasting, sustainable impact, so communities are better off when we leave than when we first show up. By sharing capacity, knowledge and resources locally, we ensure that the work can continue long after we are gone.

4. We’re one of several organizations responding to the Aleppo crisis, but the needs are massive—greater than all of us put together.

Some of the groups working right now (including us) have been featured here and here, for example.

Many people have voiced a sense of powerlessness in response to the Aleppo crisis, but you should know that a lot of good is being done on the ground, even as you read these words.

Some days, it feels like a drop in the bucket compared to all the violence. But families are being fed. Lives are being saved—because of you.

More needs to be done. A lot more. Many of the families that we are serving in the Aleppo countryside have told us that this is the only aid they’ve received. And for thousands who may still be trapped in parts of Eastern Aleppo, where no aid can get in or out, the situation is even more desperate.

5. This is a volatile, rapidly changing situation.

The battle over Aleppo is often treated as a two-side conflict—the government versus the rebels. The truth is that there are multiple layers to this conflict, making its resolution even more fragile and volatile. Reports from the ground are changing by the hour as evacuation deals and ceasefires are made and broken and made again. No one really knows exactly how this is going to play out.

Working as local as possible with local supplies means that our programming can be responsive to a changing situation. So regardless of what happens next, you will be there. Showing up and meeting needs as they arise.

6. We serve everyone in need, period.

If you want to know what side of the conflict we’re on, we’re on the side of families whose lives have unraveled in all the violence. We’re on the side of the bombed-out, driven-out, desperate children and mothers and fathers who lost everything. We’re on the side that says violence unmakes the world, and it’s our job to remake it—through our tangible acts of preemptive love. By showing up in the face of fear and violence—and choosing to love anyway.

We serve wherever we can, wherever the need is greatest. We serve in the hard places. We serve regardless of what religion you practice, what sectarian group you belong to, or what “side” you’re on.

We’re on the side of people. Period. And we will keep showing up with food and sleeping bags and tangible acts of love for those in need.