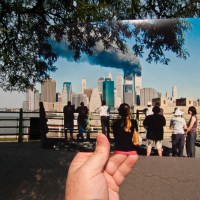 If the September 11th attacks were a person, they would turn 21 today. Two-plus decades; it’s startling to realize how much time has passed and how much the world has changed. In the rearview mirror of remembering, the events of September 11 are closer than they appear.

The pre-9/11 era was a world without long-term wars fought in Iraq and Afghanistan. It was a world without heightened security measures at borders, airports, and public spaces. US Immigration and Customs Enforcement (ICE) didn’t even exist. It was a time without mass surveillance, before metadata from cell phones, emails, instant messaging, and web browsing history was collected through programs like PRISM (a tool used by the US National Security Agency to collect private electronic data of internet service users such as Gmail and Facebook). And, contrary to our present fugue of polarization and division, it was the last time the people of the US united around a national purpose.

Two images resound from that world-order changing day: the smoking Twin Towers collapsing inward, plumes of slate-gray clouds billowing above orange-yellow flames licking everything, and first responders rushing into chaos to meet others at the worst moment of their lives. In juxtaposition, these images pit our capacity for violence against our capacity for love.

I lived in New York City then. Remembrance is personal for me.

On September 11, 2001, a tired fireman arriving at the station house after a Monday night shift, turned around and jumped on a fire truck rushing to the World Trade Center, ready to run into a burning building while others ran out. Musical theater actors working their “day jobs” in the twin towers sang show tunes to comfort strangers descending hundreds of stairs as the building they were escaping burned. A wine bar owner, weary from the Monday night close, joined his policeman friends at Ground Zero to find survivors in the rubble.

A woman zombied-dusted by clouds of debris walked her dog and two cats out of Ground Zero, heading north, trying to outrun the second tower before it fell. A taxi driver saw her on the road and drove her to safety in Midtown, at no charge. How we responded to the September 11 attacks demonstrates the very best of how a community can come together in a crisis and why building caring communities will ultimately stop the spread of violence.

In the aftermath of 9/11 and subsequent US retaliatory military strikes against Iraq (not involved with the 9/11 attack), Preemptive Love started facilitating heart surgeries for vulnerable Iraqi children and invited American friends to fund those surgeries. With that, a coalition of peacemakers was born. As our roots grew in our community around the world, so did our programming. We started providing emergency aid relief to areas scourged by war, often running into active war zones to deliver food and water while the bombs were still falling. Our vision grew: To end war. Our mission focused on stopping the spread of violence by providing relief aid, creating jobs, and building community relationships.

Like the everyday people whose capacity to love urged them to Ground Zero, our community of peacemakers remains committed to meeting people where they are, staying with them so they are not alone, and cheering them on to more peace-filled futures.

Whether we are delivering medical aid in Syria, bringing food and clean water to the indigenous communities of Colombia and Venezuela, creating jobs for moms and dads rebuilding their lives after conflict in Iraq, bringing relief aid to earthquake and flood victims in Afghanistan, providing tech skills and English language training to people fleeing violence in Mexico, or fostering peace in our fractured communities at home in the US and around the world, our community of peacemakers embodies the same capacity for love I witnessed on 9/11 because we know we belong to one another.

There’s another 9/11 photo I think of: charcoal gray smoke rises over the Manhattan skyline, now devoid of two conspicuously tall towers. On the far left-hand side, the afternoon sunlight sparks the back of the Statue of Liberty, shimmering her a minty green. Her right arm holds her torch straight up into the sky, a defiant symbol of strength and resilience rooted in her community.