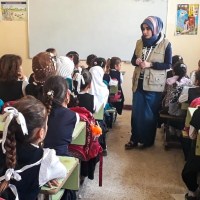 “A brother is a supporter, not an oppressor.”

This is the message of love and unity being shared among schools in Iraq. Words passed on to boys and young men as our team on the ground works to fight against the harrowing and prevalent reality of violence against women.

Teaching boys to respect and protect women and girls acts as a small step towards breaking the toxic cycle of violence against women. Alongside this, girls are taught of their worth and the power that education can bring to their lives.

With these small steps, we’re hoping to plant seeds of consciousness to pave the way for a brighter future for these children. Gender-based violence is not just a women’s problem, it is a human one—and it is a major barrier to peace. By empowering women, a whole society empowers itself.

Most women know the feeling of male eyes reducing them to objects, of being catcalled or groped as they walk down the street. We know what it is like to live with that lingering fear as we walk to our front door, get into a taxi, laugh too loudly or look the wrong way. Because never mind the countless testimonies of sexual abuse and violence and intimidation, the facts alone speak for themselves. As women, we have to constantly be vigilant as we navigate the insidious risk of sexual or physical violence.

Violence against women is not confined to dark, isolated pockets of the world, far from the western conscience. The United States ranks as the tenth most dangerous country in the world for women, according to a Reuters report, and came in third with Syria when respondents were asked what the most dangerous country was for women in terms of sexual violence, including rape, sexual harassment, coercion into sex, and a lack of justice in rape cases.

In times of humanitarian crisis or emergency, this danger can be even greater, with women often the first to make sacrifices when a family or community is in pain. For women and girls here in Iraq, a country reeling in the aftermath of war, the threat of violence can be very real.

In the context of conflict and displacement, women tend to pay the highest price, susceptible to sexual and physical violence and psychological abuse. During the years that ISIS controlled large swathes of territory in Iraq, there were horrific accounts of sexual slavery, forced marriages, rape, verbal and psychological abuse. Women from many religious and ethnic backgrounds were targeted.

Often, women are most vulnerable in a space synonymous with safety: at home, at the hands of a brother, father, husband. Statistics alone indicate the widespread nature of violence against women in Iraq, where two-thirds of incidents are perpetrated by a family member. Meanwhile, according to the UN, one in three adults in Iraq think that violence towards women is acceptable.

Now as Iraq slowly rebuilds from war, the devastating effects linger among women. At a time when families are rebuilding their lives, the search for safety is far from over for so many women, who suffer continued abuse in what should be the safest place of all: their own homes.

In our center in Sinjar, in northern Iraq, our team is working closely with a number of women, including three female survivors of ISIS, to provide a safe space in the wake of brutal oppression.

One of the three survivors arrived with severe psychological issues, deeply traumatized from the nightmarish atrocities experienced at the hands of ISIS. Like so many other girls and women, her daughter is still missing.

“To shift her attention I offered her work as cleaner and helped her in the… center, where she will be under observation by the mental health doctor and Personal Social Service (PSS) team,” explained one of our project managers.

It requires incredible courage for women to seek help and support, to try and heal from the trauma of past experiences or tackle current pains. For women suffering from the violence of war, or trauma at the hands of those who are meant to protect them, the aim is to create a space where they can go to feel safe.

Often women can feel trapped or helpless, but our team aims to make it as easy as possible for women to reach out and get the support they need. We provide food packs for women who attend counseling sessions, to allow them the time and opportunity to come and talk without questions or judgment from outside eyes.

We have also partnered with other organizations to provide job training, including sewing classes, and small business grants to participants. This acts as a form of practical therapy, encouraging women with something to do with their hands, while providing them with the skills to be more financially independent.

Such support is critical for survivors of violence against women, most of whom struggle to overcome the horror of their experiences. For many, life has been shrouded in a sense of darkness, with experiences of isolation, anxiety, and depression, as well as nightmares, insomnia, flashbacks. Through this, we hope to offer women a space to begin the healing process.

In Iraq, where a spiral of long-term conflict and humanitarian emergencies has created a desperate situation for many families, the number of young girls being married off is too high. In a country recovering from war, a lack of access to education or livelihoods for families can pressure many into marrying their daughters at an incredibly young age, either for financial gain or protection.

Life can be extremely challenging for Iraqi women and girls, and many are left feeling isolated, disempowered, and with limited freedom. Alongside this, child marriage and violence are usually linked, placing women and girls at particular risk of sexual, physical, and psychological violence throughout their lives.

But it can change. Women and girls in Iraq have the ability to become incredible future leaders in their country.

We work to end underage marriage by hosting outreach sessions in schools, refugee camps, and local communities, where girls are informed of the negative consequences they face if they drop out of school to work or get married.

During the days of ISIS, daily life became one of brutal oppression and girls were forced to drop out of school. Now, as opportunities grow and our team reaches out, these girls are hoping to take their future into their own hands and embrace their education.

Equip women and girls in post-ISIS Iraq to protect themselves from violence.