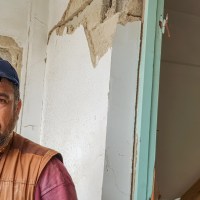 After surviving violent conflict, witnessing his hometown destroyed, and enduring the hardships of displacement, Adnan was ready to come home.

He was ready to have a home with a kitchen to cook in, a place to feed his family and even host guests to eat. Ready for a working shower, to wash off the stresses of the day or clean the dirt from his children’s hands. And for a bed to sleep in, a place for his family to rest their heads and feel safe as night surrounds them.

When Adnan finally returned to his neighborhood in Aleppo, Syria, with his wife and four children, he saw these hopes were far from the reality. The apartment he had spent years making into a home was a shell of what it once was, reduced to a painful reminder of the sheer devastation the city had endured.

It was not just the small things, like the rows of spices in the kitchen or the carefully selected curtains. It was the doors stolen from their hinges and the cold air rushing in. The windows shattered and the once perfectly placed tiles ripped out. Some of the walls were on the verge of collapse and the bathroom and kitchen unusable, destroyed during the bombings.

Despite everything his family went through, when Adnan returned he realized their hardship was far from over.

After so many years of fighting, Aleppo is no longer a war zone, but the family home is far from the place of refuge Adnan had wished for. This is a city slowly rebuilding from the destruction of war—but there is continued violence, despite the relative state of stability. Moving back to a home with no windows and crumbling walls leaves Adnan and his family far too vulnerable.

Currently, Adnan and his family are trapped in limbo, back to the home they longed for but unable to return. For the last year, they have stayed with Adnan’s brother, paying rent that cuts further into the family savings. Last month, his entire salary was spent on clothing and school books for his children. As the money dwindles, the chance to save and rebuild their home feels far from his grasp.

After waiting for so long, it feels like there is no end in sight. The sense of loss and exhaustion is etched across Adnan’s face, tears in his eyes as he talks to our team. However, there remains a sense of hope among his family and community.

“This war has tested us as people”, Adnan tells our team, “but it has brought us back to be one heart and one hand together. This was the only positive thing about it.”

And this is where you come in, helping families like Adnan’s return to the safety of their home and community after years living through war and displacement.

When we talk about rebuilding homes, the aim is to simply make these spaces livable for families to return to normal life. You help provide the basics for families to have one fully refurbished room to sleep in, one working kitchen where they can cook their meals, one functioning bathroom, along with windows and doors.

As Aleppo begins the slow process to recovery, these are the simple needs that help Adnan and other families return to their homes and the routines of daily life with a sense of safety and comfort.

Give now to restore homes and communities in Aleppo.