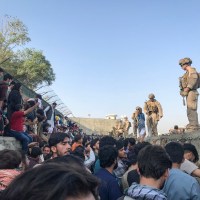 “What a disaster,” Rafi thought when he saw the airport gates thronged with thousands of terrified men, women, and children. As US troops withdrew from Afghanistan and the Taliban took over the country, each metal barrier at Kabul’s airport fomented chaos, seemingly impossible to enter. That safe feeling Rafi used to have on the US base where he worked as an interpreter for the US army had abandoned him. Although he had applied for the Special Immigration Visa (SIV), Rafi’s documentation was still in process, and he didn’t have anything to prove he qualified for evacuation. The Afghan Special Immigration Visa, set up to bring Afghans who had served US missions as translators or interpreters to safety in the US, had so many procedural hurdles that by 2019, the average wait time for an applicant to receive a response was four years.

Many of the Afghan men and women who worked at great personal risk for the US in Afghanistan over the last twenty years–rights activists, humanitarian aid workers, journalists, judges, students and teachers at American-backed universities, special-forces commandos, and the Afghan female tactical platoons which accompanied them as well as interpreters and translators–would have to find their own way to safety.  Through a combination of grit, connections, and luck, some made it out. We sat down over Zoom with a former Afghan interpreter for the US forces now living in the US to talk about starting over after leaving everything behind.

Days prior, the Taliban had taken control of his home city, and Rafi tried to balance what he didn’t know from what he did. At this point, he didn’t know if the Taliban would take control of the country, and he didn’t believe what he heard in the Afghan media. Then, he read in an American newspaper that the Taliban had seized “some devices” which could tell who had worked for the US forces by taking a person’s fingerprints. That was the deciding moment. Knowing that if he were found by the Taliban at his family’s home harm would come to his loved ones, Rafi destroyed all his documents, packed his life into a suitcase, and boarded a bus for Kabul. Over the next twenty-something hours, through 56 checkpoints, luck was by his side. Not once was he fingerprinted.

Taking in the crush of men, women, children, and babies at the airport, Rafi thought carrying a suitcase while trying to make his way to a gate would have killed him. Remembering that chaos of people he said, “No one cares about the other. I don’t know how to explain it. It was an easy decision {to leave his belongings behind}. Just try to reach the gate,” he said as he mimed kicking his suitcase away from him. He ventured forth with only the clothes on his back and his phone in his pocket.

On his phone, he accessed emails showing that his Special Immigration Visa was in process, but the  military personnel he spoke to disregarded him because he did not have a visa or “the right email from the embassy.” Through sheer determination, Rafi waited near a gate for days and nights without a personal stock of food or water, allowing himself to leave only once per day to find sustenance. He stayed near the gate because nowhere was safe. The Taliban had checkpoints around and inside the airport, too. Remembering those tense days before his evacuation, Rafi allowed himself a half-smile, “You may know that if you do hard, sometimes it works.” In the crush of people, an Italian soldier recognized Rafi from a base where Rafi had worked a thousand kilometers away from Kabul and let him enter.

Getting inside an airport gate was an important step, but Rafi still needed to get on a flight. He started messaging his friends and former supervisors in the US Special Forces. He was told to send a phone message with his photo and location inside the airport to a friend who sent it to “some other guy” who found Rafi and helped get him on a flight. By August 25, Rafi was in the United States.

Rafi doesn’t know how he was never fingerprinted, but he knows he was lucky. These days in Kabul and other cities, the Taliban check every house, looking for people who worked with the US forces or the Afghan army. Back in August, they didn’t check as much. Rafi thinks they were focused on “the big fish”, checking government houses. Now, it is much more dangerous for interpreters. Rafi reports that many have been tortured or beheaded. Despite the constant danger to those left in Afghanistan, Rafi thinks the US’s twenty-year presence in Afghanistan was beneficial because people had an opportunity to be educated. He is proud to be part of a generation to hold a bachelor’s degree. He told me his four sisters and three brothers and himself have all earned bachelor’s degrees. “This is a big achievement in a third-world country in two decades.”

“Every single refugee has a different story,” Rafi is wise beyond his twenty-something years. He was flown from Kabul to a US base in Bahrain, where he stayed for a few days, and was then flown to Washington DC before he was moved to a base in Virginia. Other evacuees were flown to bases in Kuwait, Abud Dhabi, or Qatar, and some refugees are still stuck on these bases. He considers himself lucky because he stayed on his base for only 40 days whereas his friend stayed on base for almost four months. “What did you did for the US forces, like you have a case, like SIV, so you go to Fort Lee base” meaning how a person worked with the US forces determined which base a person was sent to. Every base has its own facilities, “Some were so good or some of them were not.” He reports that on some bases, people sleep 10 to a room because there are so many refugees. He joked that he spent all his time online, waiting for food or eating. There was nothing else to do.

Rafi is hopeful about his future life in the US. In Afghanistan, he worked at a bank,  at an international non-governmental organization, on a refugee resettlement project for the International Organization for Migration (IOM) before he worked as an interpreter for the US military. Through a connection on the military base in Virginia, he moved to Tennessee, where his connection gave him a place to stay and a job as a warehouse associate. He was soon promoted to office support, which he does now working from home. Not one to be idle, Rafi recently joined an online freelance site and is building up his business skills so he can find a better job in the business sector.

“The way of living from Afghanistan to the US it’s a big difference.” Besides sending money to his family, Rafi believes that if he does his best in the US, he can somehow change something and help Afghanistan in the future. He recognizes the US’s presence in his home country brought “the war side and the improvement side,” but he is looking towards the future.