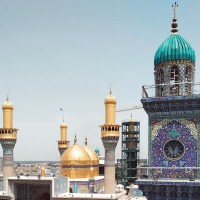 If you’re out under the night sky in the next few days, look up and try to spot the new moon. Can you see the pale sliver? If so, Ramadan, a Muslim holiday season not unlike the Christian Lenten period, has begun.

But so what? Why should you care? If Ramadan is for Muslims and you’re not Muslim, what’s the big deal?

In understanding what’s important to others, to our neighbors, we’re able to build a bridge to them. We learn about what’s important to them, what builds their faith, what shapes the rhythms of their days, just like ours. We see more of how we’re the same, rather than fixating on how we’re different.

Ramadan is the most important holiday of the Islamic faith. But what is Ramadan, why is it important, and how is it celebrated by Muslims around the world?

Ramadan is holiest of months, a time of spiritual focus and renewal. During Ramadan, Muslims fast, pray, and gather together as a community.

Ramadan takes place during the ninth month of the Islamic lunar calendar. It starts when the crescent moon is sighted.

Ramadan ends after 29 or 30 days (depending on the moon) and concludes with Eid Al-Fitr, the “Festival of Breaking the Fast.”

Why is Ramadan Important?

During Ramadan, Muslims celebrate Allah giving the Quran to the prophet Mohammad in 610 AD. During the month, Muslims fast from food and drink (including water) during sunlit hours. They also abstain from sexual activity, anger, and immoral acts. Fasting, which is one of the five pillars of Islam, is seen as an act of worship, to grow closer to Allah, and also as a way to grow in patience, compassion, and self-control.

In addition to fasting, Muslims are encouraged to pray, do good, and spend additional time in reflection during Ramadan. People read or recite the Quran either at home or during nightly prayers at the mosque, so that by the end of the month the whole Quran will have been presented. Some mosques will invite special speakers to encourage and teach during Ramadan.

Charity is another emphasis of Ramadan. Muslims are encouraged to be generous and to use their fasting as an opportunity to think about and pray for those in need. They believe Allah multiplies blessings during Ramadan, so they seek to give more.

RELATED: 4 Things Every Non-Muslim Should Know About Ramadan

During Ramadan, Muslim families often wake up together early, before the sun rises, so they can eat. This pre-dawn meal is called suhoor.

Once the sun goes down, Muslims often gather with their families or at the local mosque to eat together. This meal is called iftar.

Nightly prayers, called taraweeh, are also held at the mosque. These gatherings are meant to foster community, while also providing an opportunity for people to gather and pray.

Ramadan itself consists of three parts. The first ten days focus on mercy. The second ten days are for forgiveness. The third set of ten days are devoted to seeking refuge in God.

During the last ten days of Ramadan, there are extra celebrations and opportunities to worship, all leading up to the Laylat al-Qadr, or the “Night of Power.” This is the night Muslims believe the Quran was first revealed to the prophet Mohammad. It is considered the holiest night of the year.

Not all Muslims fast during Ramadan. Children, nursing or expectant mothers, and the elderly are all exempt from fasting. Those who are sick or traveling are also exempt. For those who can’t fast, they sometimes will provide food to others in need in substitute for their missed fasting, or they can make it up at a later time.

The elements of Ramadan remain the same everywhere, but the expression changes depending on the culture. Regardless of where you live, Muslims fast from sunrise to sunset. They celebrate the end of each day with the iftar meal. They focus on their devotion to Allah and their generosity to others.

But depending where you live or where you are from, other aspects of Ramadan may differ. The foods eaten at the iftar meal will vary according to culture. Some cultures celebrate iftar with extended family, others with their fellow Muslims at the local mosque.

In Morocco, chicken and rice soup is a common iftar meal. In Egypt and Lebanon, stuffed grape leaves are common. And curry prawns are often found in Malaysian and Indonesian areas. In America, a Muslim family might just decide to indulge in a hamburger and french fries.

Recently I attended a mosque service where the Imam spoke about preparing themselves for Ramadan. As a Christian, I was in the middle of Lent, and I was struck by the similarity between our two religions: preparing for Ramadan, a season of fasting and self-control so that one might grow closer to God; and Lent, a season of preparation for Easter, where Christians like me fast from food or other habits in order to grow closer to God.

Ramadan is unique to Islam and incredibly important. And as we grow in our understanding of the traditions of others, we grow in our ability to connect, to relate.

When a Muslim friend tells me they are celebrating Ramadan, I can ask how their fasting is going, what they’re learning. I can ask if they’re enjoying the extra time with their Muslim community and what recipes they’ve been making. I can contact my local mosque and see if I can participate in a community iftar meal.

Instead of letting Ramadan be another thing that makes us different, I can let it be the thing that brings us together, that creates a bridge.