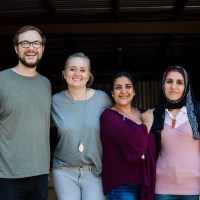 When we say we want to partner with refugees and to empower them with choice and opportunity, we don’t just mean in the camps of Iraq or the fields of Syria. We mean everywhere—including the US.

Some estimates show that over half the city population of Clarkston, Georgia is from outside the US. In the 1940s Clarkston was primarily white and sometimes hosted KKK rallies. But today it is a largely peaceful, diverse community.

In the 1980s, Clarkston was chosen as a refugee resettlement community. Over the next decades, resettlement agencies worked to relocate thousands of refugees, coaching the city through relational divides and transitions. Clarkston is now considered the most diverse square mile in the US.

So when it came time to open up our own empowerment center and storefront for our apparel, merchandise, and refugee-made goods from Iraq and Syria, Clarkston was an easy choice. We’ve long said, “The frontlines are where we live.” Here was an opportunity to show up for refugees living in the States. A place to root ourselves and to start listening, to know best how to serve those who have resettled here.

Our Empowerment Center is more than a hub for our shop, a place to fulfill orders. Our vision is so much bigger. Resettled refugees need opportunities to acclimate to their new city and culture. They need someone to listen to what they need in this place, to partner alongside them—whether it’s jobs or training or education or whatever else they need most.

That’s what we want to provide.

Sabah and Hataw are the first to partner with us at the Empowerment Center, working to process and ship orders as they come in. They are animated as they work, talking excitedly in Arabic—smiles and laughter and excited hand gestures. Sabah is eager, hard-working, tender-hearted, and resourceful. Hataw is a natural-born storyteller, perceptive, focused, and intuitive. They didn’t know each other before they became coworkers, but they quickly became friends.

Sabah and Hataw fulfill all our Shop orders, packing boxes and envelopes and preparing items for shipment. They are fast and efficient, filling the shipping room with chatter as they work.

Earlier this year, Sabah helped Hataw study for her US citizenship test. And when Hataw passed her test, she promised to help Sabah study for hers, when she’s ready.

Sabah and Hataw love their work. Hataw cooks breakfast for her family the night before, so that in the morning she can get out the door quickly to get to work. In a culture that values hot food, freshly prepared and served, putting her job first is significant for both Hataw and her husband.

Hataw came to the United States in 2011, along with her sister, her husband, and her children. Hataw loves cooking and often brings Kurdish and Iraqi foods like biryani and dolma with her to work. One day, when her son is a little older, Hataw wants to own a restaurant.

In 2005, Sabah moved from Egypt to Baghdad, Iraq, where her husband worked as an engineer. Sabah attended Baghdad University for a degree in psychology. In 2013, Sabah and her family fled Iraq for the US after her husband’s life was threatened. But severe asthma and rising medical costs forced Sabah’s husband to return to Egypt. She sees him only once every 6 months.

Sabah and Hataw are bright and cheerful as they talk, eagerly turning their phones around to show off pictures of their family members. But they quiet when they reflect on their home countries and what they miss.

“All Iraqis, everywhere carry so much weight in their hearts,” Hataw says. Sabah nods. She had nine sisters back in Iraq. One has died and two more are very sick. Sabah misses them desperately.

It can be lonely living in the US, far from family, surrounded by strange customs and language. One way we can partner with the refugee community as they resettle is to provide them with jobs near their homes, so they have more time with their families. It’s creating a workspace that’s accepting and empowering, that sees people as refugees, yes, but also as intelligent and capable workers. Women and men determined to take their lives—past and present—and to shape a glorious future.