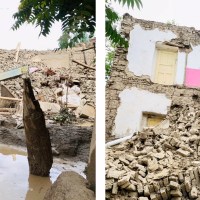 Thousands of Afghans in the Logar province woke up to widespread flooding and destruction Sunday morning. The worst damage occurred in a long, narrow green valley approximately 50 miles south of Kabul. After months of prolonged drought, the parched ground could not absorb the heavy rains, resulting in flash flooding.

In a moment, everything Afghan families had worked for, everything they had saved, their whole lives, were eviscerated.

Over 20 fathers, mothers, and children died during the weekend’s flooding, and another 35 vulnerable people were injured. Over the past week, 4,000 families in eastern, central, and southern Afghanistan have been impacted by devastating rains. Many lost their homes, and with that, their life savings as gold, jewelry, and cash money stashed for safe-keeping was washed away.

Not only did the flash floods destroy over 3,000 homes, but they also crushed livelihoods. Fast-moving water decimated over 5,000 acres of agricultural land, destroying apricot, grape, almond, apple, pomegranate, and peach orchards, and killed over 2,000 livestock. In a country where over 95% of people do not have enough to eat now, even more will go hungry.

The flash floods ruined vital public infrastructure. They wrecked canals and cut off access to clean drinking water as wells filled with mud, stones, and debris. The flood waters soaked stores of firewood, a lifeline for when the cold weather comes.

Now, families left without food to eat, clothes to wear, and places to sleep are fleeing to the mountains for refuge.

In Afghanistan, Mexico, Venezuela, and so many other places in the world —we’re here and we’re responding. Our team is reaching out to families in flood-water areas and crisis zones. We’re bringing emergency aid: life-saving food packs and hygiene products.

Give now. Rush aid to families in need today.