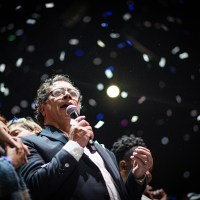 Bogotá, Colombia- Petro Gustavo picked up arms against the Colombian state as a young man. Sunday he won the highest office in the country, becoming the first leftist president in Colombia’s more than 200-year history.

His vice-presidential pick, renowned environmental activist Francía Márquez, is now the first Afro-Colombian woman to hold the office: a drastic change in a political system that has been historically dominated by upper-class white men from the capital cities. Perhaps just as astonishing, the second-highest office in the country will be occupied by a woman who grew up poor in Cauca, a violence-ridden region that has been long neglected by politicians in Bogotá.

“This is for our grandmothers and grandfathers, women, young people, LGBTQ people, Indigenous, peasants, workers, victims, my Black people,” said newly elected Afro-Colombian vice president Francía Márquez in her victory speech, “and those who resisted and those who are no longer with us, for all Colombia.”

For supporters of Colombia’s 2016 peace deal, critics of the brutal police crackdown on protests last year that left at least 60 dead, and activists in conflict regions, the victory means a center-stage voice in national politics— a power they have never held.

Voter turnout in Black and Indigenous communities as well as conflict zones sky-rocketed compared to the first round. In Bogotá, where support for Petro is high, some supporters were overwhelmed with emotion.

“It is a victory I have waited for my whole life!” said voter Andrea Vargas through tears outside the convention center where Gustavo Petro’s victory party was underway.

“For years, I have watched the same violent group rule our country, and now….” she broke off. Weeping with joy as her friend hugged her. The streets were filled with honking motorists despite the rain. Some residents hung from windows shouting and banging pots.

The election was close, though Petro exceeded expectations set by polls in the final week of the campaign by garnering 50.4% of the vote— a 3-point lead over his ostensibly right-wing opponent, Rodolfo Hernández.

Many experts feared violence after a contentious campaign season that included death threats, shows of power by criminal armed groups, and a highly polarized electorate, but the election proceeded calmly and largely without incident.

Current president Iván Duque immediately acknowledged the results, as did Hernández, assuaging fears that right-wing leaders would dispute the victory with claims of electoral fraud.

Petro ran a campaign focused on addressing Colombia’s rampant inequality, the second-highest in Latin America, as well as weaning the nation away from fossil fuels and re-implementing Colombia’s 2016 peace deal.

Promises made by the government as part of a deal to end a 52-year civil war with rebel group the Revolutionary Armed Forces of Colombia (FARC) have gone largely unfulfilled by the current administration of Duque: particularly investments in infrastructure and economic opportunity in the regions the guerilla group used to control. The vacuum left behind when the FARC disarmed was quickly filled by other armed criminal groups, whose power has grown dramatically in recent years.

“This story we are writing at this moment is historic for Colombia, Latin America, and the world,” he continued, “The more than 10 million people who voted for Rodolfo Hernández are welcome in this government.”

Petro faces serious immediate challenges when he takes office in August. Colombia is still reeling from a COVID-induced economic recession that brought Colombia’s already high poverty rate up to 40% as well as the growing power of armed criminal groups in rural areas. He also takes office without a majority in Congress and amidst an extremely polarized populace.

“I don’t trust Petro,” said taxi driver David Caprilles in Bogotá, “he is a lifelong politician, and all politicians are dirty.”

“But I voted for him today,” he continued. “Because for as long as I have been alive, we have tried nothing but war. Peace is the only way forward.”

VP-elect Márquez however was undeterred by the challenges that lay ahead of her and Petro. “Thank you for having planted a seed of hope,” she told supporters at her campaign’s victory celebration. “After 200 years we will finally build a government for the people.”

“A government for the ‘nobodies’ of Colombia. We are on our way to dignity and a beautiful way of life.”