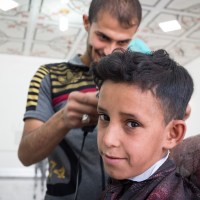 A steady buzz fills the air of Ahmad’s barber shop.

The clippers glide over the back of the boy’s neck with long strokes and tiny touches to catch stray hairs around the ears. The sound bounces off the tile floors and bare walls.

The boy in the chair is patient. He tilts his head this way, then that, as Ahmed makes a first pass with clippers, next with shears, and then finally a straight razor. The boy’s brother waits his turn in a chair along the wall; their mom sent them across the village to get much needed trims.

Four years ago it was Ahmad’s brothers’ hair that fell to the floor around his feet. He taught himself how to cut hair, and his younger brothers were willing subjects. He was only 16 then, but he knew that he loved it.

Practicing at home allowed him to gain skills and confidence, and soon enough he had other clients in his village. This is where war interrupted his life, as war usually does, cutting through the patterns of the everyday.

ISIS revealed itself in Iraq slowly at first in places like Fallujah and Mosul, and then all at once. ISIS never reached Ahmad’s part of Iraq, but he felt compelled to defend his country nonetheless. He joined a militia, left his parents’ house, and went to war.

Ahmad volunteered to fight with hundreds of thousands of his countrymen, in a militia established in 2014 with the arrival of ISIS. It came under the authority of the central government, but was separate from the official army. Why does that matter? Many of the men who fought against ISIS were volunteers in the truest sense of the word—not only did they choose to join, but they were never paid for their service.

Ahmad continued to think about being a barber throughout the war. He knew that eventually the war would end, and he would need a job to support him and his family.

The war ended for Ahmad sooner than others—he was injured while fighting in Mosul, and couldn’t continue. He returned home to his family–parents, brothers and grandmother—as a 20-year-old injured veteran. As much as he’d already seen, the majority of his life stretched out ahead of him, filled with uncertainty.

The straight razor scrapes across the boy’s skin in confident strokes, defining the edges of his haircut with clean lines.

A few flicks with a long-bristled brush sweeps the plastic cape clean. Ahmad takes it off of the boy, who quickly changes spots with his brother.

Through the wide shop windows we see cars passing outside. The shop is on a main road connecting a string of rural villages. Ahmad’s shop is clean and bright. His sign hangs outside announcing his trade to people passing by. Most of his customers come from his village—some of them returning customers from before he left to fight in the war.

Many of the men who fought against ISIS were volunteers in the truest sense of the word—not only did they choose to join, but they were never paid for their service.

We ask Ahmad about his dreams for the future, and they are filled with clippers and shears. He’s currently training his 16-year-old brother how to cut hair, and when he’s ready, he’ll take over the second chair in the shop. Someday, if he has sons, he will train them to be barbers, too.

Ahmad taught himself how to cut hair. But he needed a little help to turn that knowledge into a successful business.

You gave Ahmad that help. You helped him secure this shop, the equipment and supplies he needed. Ahmad tells us about a future built around his barber’s chair—for himself and for his sons he doesn’t even have yet—and you helped to make it happen.

Support our friends working to earn a living and make a new life in post-war Iraq. Give now.