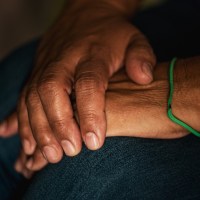 The gangs were always protected by darkness in the early morning, when Luisa handed out backpacks to her three grandchildren, seeing them fearfully off for school.

But in the final weeks before Luisa put backpacks on the three children to leave Honduras for good, the gangs in the area had become more aggressive, even in daylight.

Luisa’s teenage granddaughter was being stalked by a man who would sometimes bring her gifts and money as bribes, and other times rob her lunch money. He had stolen the family’s cell phones. They were never certain of his gang affiliation, if he was a sicario (or hitman), or why he singled out this girl. Nevertheless, the young girl’s life was shrinking from fear—she was staying home, keeping the blinds shut, skipping school, and growing in paranoia.

Is it paranoia, when fear is a fact?

Many years ago, Luisa’s daughter ran away from the family. After her abusive husband abandoned her, she returned home with her three small girls. Luisa welcomed them into her home, although this drove a rift between Luisa and her husband. He, too, had been abusive and, out of pride, had sworn off his daughter and refused to reopen his heart to her.

So the five of them began a new life across town. Then 6 years ago Luisa’s daughter left for the US.

She made and sold corn tortillas and paletas (popsicles). This was their life. It was simple, even impoverished, but they had one another, a home, food to eat, and the girls had their education.

But the violence just became too bad… and too close to home.

Luisa devised her plan quickly. There was no time for research. They had no access to the phone or internet, since their phones had been stolen.  There was no clear guide to follow. She simply asked for advice, and did what sounded best for the girls.

Once she got to Mexico, she would ask which way was north, buy a bus ticket, hitch a ride, or just walk.

After three weeks, Luisa and the girls reached the border and crossed. They expected to find the first American in uniform and explain they were in need of asylum. Instead, they were arrested and all their possessions confiscated by Border Patrol. They separated Luisa from the girls immediately—pulling the youngest away as she cried, “No, Mama, Mama. I don’t want to go!”

Luisa was accused by the agents of human trafficking (though not charged). A judge told her she could not claim asylum without some sort of proof. She was returned to Mexico without her girls, with a court date several months out. She believed her court date was for an asylum claim, but in fact, the English language papers she received (but couldn’t read) detailed a criminal case for an illegal border crossing.

Between her arrest and release into Mexico, Luisa spent several weeks in a windowless room at a processing facility. There were no showers, no toothbrushes, no privacy. The other women did not get along with the guards. When things would get too loud, the guards would shut off the lights for many hours at a time. When the room began to smell badly, Border Patrol increased the regularity of cleanings and began using bleach everywhere, including air vents. During and after the cleanings, the women would cry from the sting in their eyes and cover their faces with shirts and sheets to try to ease breathing the bleach-stained air.

Luisa was never granted a phone call to contact friends or family. Nor did she get any information about the whereabouts or well-being of her grandchildren. She was just released, suddenly, without any resources or provisions, without information or help. For a moment, she thought she would be reunited with her family but she soon realized she was in Mexican custody… further away, not closer, to her beloved granddaughters.

As of this writing, Luisa is still in the volunteer migrant shelter in Mexico, where we met her. Alone.

How can a woman who gives so much to her family, who opens her arms to love so graciously, receive so many blows? Do we really live in a world that believes, or feels comfortable with, this woman being sent off to be alone?

And nothing about this story is terribly singular. From the experiences in poverty, to the gang violence and treacherous journey away from danger, to the opacity of the US legal and immigration systems and mistreatment by authorities, this has become almost typical. The more time one spends on the border, the more this story repeats again and again. Why? Because we are trapped in a cycle.

But love can break the cycle.

We start by listening, and then we take action. When it’s scary or confusing, we love anyway.

Your love is active. You sent us to sit at Luisa’s feet and hear her story. And we are responding by providing legal support as she prepares her case.

Donations and aid are good. But it’s love that makes the difference. Join our giving community in support of humanitarian and peacemaking efforts at the border and you’ll not only send supplies, relief, and legal support, but you will provide listening ears, shoulders to cry on, and companions who will show up in the life of refugees like Luisa’s with love that knows no borders.

Provide critical resources and support to asylum seekers at the US-Mexico border. Give now.