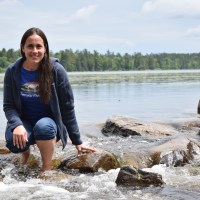 On her 39th birthday, Nicole was at the darkest point of her life. She felt alone and abandoned. She was heartbroken, already grieving things she hadn’t quite yet lost, but knew she soon would. She felt completely hopeless.

And yet Nicole dared to make a promise on her 39th birthday, as she looked ahead to the next year. She wanted to raise $40,000 by her 40th birthday.

Nicole always had a heart to give, but rarely felt like she was well-off enough financially to do that. She gave her time and her talents, but money was always tight.

Because Nicole had always been excited about turning 40, she decided, at the lowest point in her life, to move forward with intention. She chose a position of active hope, believing that in a year, through connecting with others and pursuing a greater good, she would find her life transformed.

“Giving is a way of saying I’m here for you and you matter.”

And then things got even worse.

Nicole and her family moved from Brooklyn, New York to Minneapolis, Minnesota. It was difficult for her to leave behind friends and the life she had made in NY to move across the country.

But Nicole didn’t give up. She continued to organizer her fundraiser, choosing eight different organizations that she had a personal connection with. She cold-called people to ask for donations and promoted it online.

In the midst of fundraising for others, Nicole also found herself giving more than she ever had before. Somehow, trying to raise $40,000 gave her the freedom to donate smaller amounts. Before, giving $5 or $10 felt too insignificant to even bother. Now Nicole gave freely, whatever she could, knowing even a small amount still made a difference.

Nicole learned that “giving is a way of saying I’m here for you and you matter.”

Nicole turns 40 this Sunday, July 14. In many ways, she doesn’t feel like all that much has changed in the past year. There is still struggle, still darkness. But Nicole continues to press in, to reach for that hope she set herself toward a year ago.

“I want to define my 40s by really doing more of what matters,” Nicole said. “I don’t want to waste any more time. I want to press into what I believe matters.”

“Maybe my 40th birthday will be just as depressing as my 39th. But I’ll have raised $40,000. I’ve never done that before. That’s still incredible.”

Nicole goes on, “The act, the intention has meaning. I’m really glad I’ve raised more than $1,000. But even if that’s all I had done, there would be value in that. It’s not about the money. It’s about showing up and saying I care and these things matter. We all need that.”

I want to give to help Nicole reach her goal.