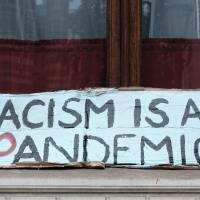 In the wake of the September 11, 2001 terror attacks, crimes against Muslim-Americans soared by more than 1600%. In nearly two decades since, the rate of violence has never gone back to what it was before 9/11.

In 2018, anti-Latino or Hispanic violence surged 21% as the immigration debate reached a fever pitch, as some migrants were labeled “animals.”

The pattern is entirely predictable. A marginalized or misunderstood group of people is singled out, stereotyped, and scapegoated for the problems we face in our society. Their humanity diminished, is it any wonder they become increasing targets of violence?

Now it is our Asian-American friends who find themselves in the crosshairs, targets of a dramatic uptick in hate crimes. More than 2,100 incidents against Asian-Americans were recorded in the first four months of the COVID-19 pandemic alone. Last month, an 84-year-old man was killed while taking a walk in San Francisco. His family endured numerous verbal attacks—and they are far from alone.

Discrimination against the Asian-American Pacific Islander (AAPI) community is nothing new. Chinese laborers were the targets of one of the earliest anti-immigration laws in 1882. Nearly 120,000 people of Japanese descent—most of whom were US citizens—were interned in concentration camps during World War II. Asian-Americans and Pacific Islanders have endured well over a century of stereotypes, discrimination, and at times overt violence.

We will not repeat the words with which our Asian-American friends have been scapegoated for the COVID-19 pandemic. But we are calling on you—especially those of you who live in the United States—to use your words, your voice to tell a better story. To speak out against anti-Asian bigotry. To forcefully reject the notion that our Asian-American neighbors do not belong or are somehow less-than.

This is our work.

This world of racism and fear and prejudice is not the world we are doomed to live in. But a better world, a more beautiful world will not come on its own. It takes all of us together, as a community of peacemakers, working for a world where everyone rises.

If you believe in this work, you can take a step with us. Join us for our anti-racism workshop and learn how you can stop the spread of violence. Register today.