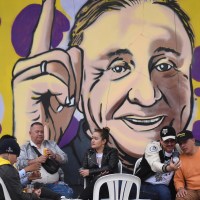 Bogotá, Colombia- Outsider candidates demanding change carried the day in the first round of presidential elections in Colombia. Leftist Gustavo Petro, the senator who once picked up arms against the state he now wants to lead as a member of guerilla group M-19, faces off against Rodolfo Hernández, construction magnate and ex-mayor of Bucaramanga who is running an anti-corruption populist campaign.

“Uribismo”, the hard-right political philosophy of ex-president Álvaro Uribe, which ruled the country for 24 years, and was represented by candidate Federico Gutiérrez, was handily defeated at the polls. Both remaining candidates have run on platforms of reform that challenge the status-quo: Petro through proposed economic reforms that would strengthen social programs and invest in clean energy, and Hernández who wants to tackle endemic corruption and shrink the federal government.

The two outsider candidates are in a statistical tie in the latest polls. The results show that Colombians may have different ideas about what reform means,  but they have demanded that whoever leads the nation chart a new course.

“I voted for the future,” Daniel Castillo told Preemptive Love outside of a polling station in Bogotá. “I voted to clean up our politics and for change. I voted for Hernandez.”

Peace also won in Sunday’s elections. With Gutiérrez eliminated, both remaining candidates advocate for the implementation of the 2016 peace accord in which rebel group the Revolutionary Armed Forces of Colombia (FARC) disarmed and rejoined civil society.

The current administration of Ivan Duque, with the public blessing of ex-president Uribe had delayed and stonewalled critical aspects of the agreement, particularly investment in infrastructure and economic opportunities for communities in formerly rebel-controlled areas. The power vacuum left when FARC disarmed, rather than being filled by the state, was quickly taken over by other armed groups who have grown in power rapidly as a result.

Gutiérrez, who was knocked out of the race by the most recent polls, largely endorsed the failed policies of Uribismo, which have advocated for military rather than social solutions to the increasing violence in rural areas as armed groups fight amongst themselves and public forces.

Public anger over the growing power of armed groups as well as military missions that killed civilians in recent months contributed to the victories of both Petro and Hernandez.

Hernández opposed the 2016 accord when it was signed, and earlier in the campaign advocated tougher War on Drugs policies such as aerial coca fumigation and stricter jail sentences, but has reversed course in the last few weeks and recently claimed that talks with rebel groups are the only way forward.

Petro has long endorsed the accord and strongly criticized the current administration for failing to live up to the promises made to communities in conflict zones as well as disarmed fighters. Petro would be the first leftist candidate to win the office in Colombian history.

Both remaining candidates have also stated that they will resume diplomatic relations with Venezuela, which were severed by the current administration in 2019.

After the first round showed slim public support for hard-right candidates, Hernández moderated a number of his right-wing policies towards more centrist stances. He reversed his positions on fracking and aerial fumigation of coca fields, both of which he formerly supported, as well as released public statements that he would not dispute the Constitutional Court’s recent decision decriminalizing abortion.

He also announced support for expansions of social programs in Colombia, though in the same announcement said he would “shrink the government” as well as cut taxes and forgive student loan debt. It is unclear how Colombia, which is still grappling with the economic fallout of a Covid-induced recession, will pay for these plans.

Petro has promised to wean Colombia away from an extraction and oil-based economy with investments in clean energy and has also proposed ambitious social plans designed to address Colombia’s high inequality— the second-worst in Latin America.

Despite security worries and threats ahead of polling, the elections went smoothly, with no serious election-related violence or fraud accusations.

Right-wing establishment politicians and pundits were quick to endorse Hernández following the elimination of Gutiérrez, who had the informal blessing of president Duque’s Centro Democratico party, preferring the pro-business candidate to Petro, whom they have criticized for years as a “communist”.

But Petro supporters remained confident at election sites on Sunday. “I never thought I would see a progressive president in my lifetime,” said Maria, who asked not to give her last name, as she left a polling site in downtown Bogotá. “For decades I have watched the same right-wing elites do as they please. The hope I have to see a president who represents all of Colombia, and not just the wealthy, is why I’m voting today.”