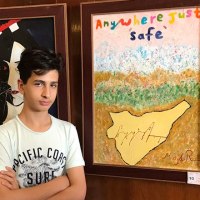 Majd stands next to his painting at an exhibition hall in Iraq. The word “Syria” is scrawled across the portrait of his home country, in a script that mimics the heartbeat line on an EKG. The line goes flat at the end—as if to say Syria’s heartbeat has stopped. Above this image, Majd wrote three simple, heartbreaking words:

Majd, 13, displayed his painting at an exhibition of refugee-made art today to commemorate World Refugee Day.

He and his two siblings fled Damascus with their mom six years ago, after their father was killed near the start of Syria’s civil war. Before escaping, Majd was kidnapped and held for ransom. His mom paid everything they had to get him back—then they fled to Iraq.

Art runs deep in Majd’s family, and it’s been a lifeline since their displacement. Majd’s mother is an award-winning poet. His sister Lana and brother Mohammad also have paintings on display at the exhibit.

Lana, 24, said her portrait of a child sheltering under a giant mushroom represents the children of Syria who have fled the war in search of somewhere safe. But there is nowhere safe, she says. Syria’s children want to go to school. They want to be able to live with their families wherever they choose. But they can’t.

To be a refugee—to live in a refugee camp—is to surrender your sovereignty in return for some measure of safety. No one should have to make that kind of choice.

Splatters of color dominate Mohammad’s painting. They represent the dreams of Syrian children, the 14-year-old says. “But no one can see.” His second painting depicts a broken egg, a symbol of Syria torn in two. Yet the sun still shines on the horizon, a sign of hope, however distant.

These portraits offer a glimpse into the lives of Syrian refugees. Into the pain they carry with them and the hopes they cling to. Refugees have been characterized as many things in the media—not all of them flattering. In reality, most of them want one thing: somewhere safe enough that they can stop running, somewhere they can stop fearing for their lives.

Their lives matter. Their stories need to be heard. Thank you for remembering displaced and vulnerable families in Syria and Iraq this World Refugee Day.