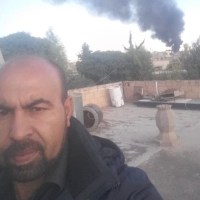 The last time I talked with Musa, he had to pause the phone conversation to pick up dead bodies from the road.

Just writing these words feels like a gut punch.

Musa lives in a Syrian village called Tal Tamr. It’s 25 miles from the border with Turkey, and it’s now a war zone. Forget what you’ve heard about ceasefires—there isn’t one here.

In a country filled with ancient places, the village of Tal Tamr is an oddity—less than a hundred years old, founded in the 1930s. It was created as a refuge, a place to start over for survivors of genocide, when the residents of 63 Assyrian Christian villages north of Mosul, Iraq were targeted for destruction.

Over the years, Tal Tamr grew to include Arab and Kurdish families. It grew into the kind of place where neighbors of different faiths live at peace with each other, which is exactly what genocide survivors and their children and grandchildren need. They need a safe place to live, to practice their Christian faith, and to heal.

Tal Tamr was that place. Was.

At the beginning of the Syrian civil war, Assyrian families found themselves threatened by violence again, and began to flee. In the last several years, Tal Tamr was captured by ISIS, later liberated and then held by the Syrian Democratic Forces (made up of Kurdish and Arab soldiers), and is now in the hands of the Syrian armed forces under President Assad. It’s currently being bombed by Turkish-backed militants.

“It was pure chaos.”

While in northern Syria, I met up with a Polish journalist named Paweł who had just returned from the frontlines at Tal Tamr.

“No one is sure what’s going on. No one has the right weapons for the situation. Chaos.”

How does the village look to Musa? Well, it looks like clouds of angry gray smoke blotting out the sky after the bombs fall. Musa took these pictures, standing in the street near his house.

The streets of his village were once filled with neighborhood kids teasing each other on their way home from school. Now it’s the place where Musa picks up dead bodies and take photos of the aftermath of bombings.

Many residents of around Tal Tamr have fled, looking for safety—Assyrians, Kurds, and Arabs. Some—mainly women and children—are fleeing to other parts of Syria. Nearly 12,000 have fled from just the area around the village. Some, ironically, are fleeing to refugee camps in the same part of Iraq where their Assyrian grandparents and great grandparents were slaughtered in genocide.

But many in Musa’s community are staying. The women and children are trapped by road closures and fontlines. The men, they are fighting until the end, they say.

It’s hard to tell what that will look like.

For many, “the war in Syria” is a far-away, faceless conflict. But the truth is, tens of thousands of people are being impacted by this war. People just like Musa.

The crisis in northern Syria is far from over. Give now to provide lifesaving food and medical care for families on the run.

I want to give to save lives in Syria.