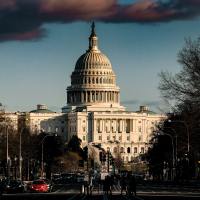 This week, right-wing protestors stormed the US Capitol in an effort to overthrow the government. This violence was incited by a president seeking to overturn the results of a democratic election in order to stay in power.

I’ve lived through moments like this before. Members of our team around the world have lived through them before. What I can tell you is this: the words we use in these moments matter.

If you haven’t lived through something like this before, you may not be equipped with the right language to describe it. So I want to share some of the words we ought to be using, how we ought to use them, and why.

This was an act of domestic terror. Terrorism is, by definition, the use of violent spectacle to achieve a political or religious objective. Terrorism seeks to frighten people into taking a certain political action—in this case, to overturn the results of an election and install an illegitimate leader.

If you’re looking for the right word to describe what happened Wednesday, it’s terrorism.

Imagine if just one brown-skinned Muslim-American had stormed the Capitol with a rifle slung over his shoulder. There would be no hand-wringing over what to call it.

When we look at the overall police response to the ransacking of the Capitol—especially compared with police responses to other recent events in the US—it’s not just that they were slow on Wednesday. That’s not the word we used in Iraq when police turned a blind eye to ISIS militants or to various Shia militia groups.

The words we used in those cases were police complicity. Police corruption. Police bias.

If these words make you uncomfortable, then ask yourself: why do police in certain settings give some people a pass and not others? Why did law enforcement engage Black Lives Matter protestors with full riot gear and tear gas and Black Hawk helicopters last summer, while some officers Wednesday—by no means all of them—allowed a mostly white mob to pass, one posed for selfies with rioters, and some were heard giving them directions inside the Capitol?

That’s not incompetence. That’s complicity. That’s giving free passage to those who were trying to overthrow the government.

Many people in the US are conditioned to see Black and brown people as a threat, and to see whiteness as normative, as baseline. It’s in the very air we breathe. It’s in the stories we tell, the movies we watch, the stereotypes we indulge. Meanwhile, whiteness gets a pass, even when it takes the form of a rioting mob.

This is what we mean when we talk about systemic racism.

Love Anyway Podcast: After the Capitol Attack: A Way Forward

There have been and will continue to be calls for peace and unity in the aftermath of Wednesday’s attack. But let us be clear what peace is—and what it is not.

There’s no amount of money we can give, no amount of superficial common courtesy that can dig a way out for us. We have to speak. We have to name things for what they are. We have to change ourselves. Our systems and policies—and our very connections to each other—are broken because of who we are.

We have to change how we relate to each other, how we interact with and love each other. We have to become a different kind of people. Some of us have more work to do than others. Some of us don’t know what it means to be targeted, to be pushed down, to be suspect every time we walk into a public space.

We all have more becoming to do.

The answer is not superficial unity. We can be made whole, but not without a path:

I hope and pray we get there—that we might find a peace big enough for all of us. A peace where everyone rises. It’s ours, if we want it.