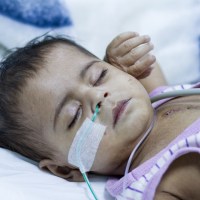 We’re gearing up for another surgical trip to Libya next week! More children will receive lifesaving heart surgeries. Local doctors and nurses will receive more mentoring and more hours of training.

We feel the urgency of the situation. Libya is reeling from an ongoing political crisis. Rival governments have fought for control of the fractured country, while ISIS has gained a foothold in the coastal city of Sirte. Then there was this recent report documenting the scope of the healthcare crisis in Libya, a ripple effect from years of instability…

“Libya’s once-efficient health system is in a state of crisis,” the report notes. Many hospitals are closed or limp along shorthanded “because of a lack of experienced medical staff and shortages of essential medicines and equipment.”

Most of the country’s expatriate medical staff “left Libya after the war against Muammar Al Gaddhafi in 2011 and the subsequent armed conflict between the supporters of political Islam and their adversaries.”

This comes on top of “a displacement crisis as people flee the violence.” Over 100,000 displaced people have taken shelter in Benghazi alone. The upheaval has contributed to “a decrease in vaccination coverage and an increase in maternal mortality.”

With its oil resources, Libya is often considered a rich country, but this is no longer the case. The health system reflects the wider state of the country: hospitals are kitted out with state-of-the-art equipment which, due to poor maintenance and a lack of spare parts, is no longer operational.

And of course, there are the many children in Libya who need lifesaving heart surgeries. One surgical trip will not solve all of Libya’s healthcare problems. But together we CAN wage peace, one heart at a time.

When others give up, you keep showing up. You lean into the mess and love anyway.

It’s time to mend hearts in Libya again. Will you join us?

Internet connection can be spotty in Libya, so our ability to provide realtime updates next week may be limited. Stay tuned after the trip to hear about the lives you helped save!