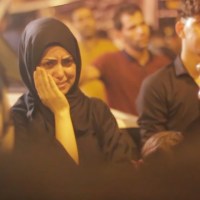 I heard the news as I was going to bed. A suicide bombing in Baghdad, targeting an ice cream shop full of children and families as they were ending their daily Ramadan fast.

Then two more attacks—one hitting a neighborhood of elderly retirees and another near a school west of Baghdad.

None of this is normal.

These attacks barely registered in the Western media. For many of us, they just don’t hit as close to home as the attacks in Portland or Manchester did the week before. We assume this kind of thing is somehow “normal” for people in Baghdad—that they must be used to it by now.

I can assure you that nothing is farther from the truth.

The bombings in Baghdad hit especially close for one member of our team. She grew up there. She used to go to the same ice cream shop where dozens were killed.

As our team gathered the next day, she tearfully asked the question that was in all of our hearts:

“Every day, people die for nothing,” she said. No one gets used to this violence, but eventually, they see a certain inevitability to it—that tomorrow or maybe the next day, it will be their turn.

“In the end, we will die,” her loved ones told her after the latest attack. “We will die without reason. So let’s at least die eating ice cream.”

It’s not normal to have to live with this kind of fear. Not in Baghdad. Not in Kabul. Not in Manchester or Portland. Not anywhere.

Violence is many things, but it is not natural. It’s not who we are. It’s not just “the way things are.”

Every act of violence is a choice.

And strangely, that’s what gives me hope. Because if violence is something that is made, then it can also be unmade.

Violence is unmade, a little at a time, by doctors in Baghdad who toiled through the night caring for the wounded. It’s unmade by local families who took in shell-shocked, orphaned children.

Violence is unmade, a little at a time, when we show up for war-torn families on the frontlines in places like Mosul and Aleppo and Raqqa, even while the bombs are still falling and the war is still raging and everyone else says “it’s too dangerous.” Violence is unmade when we refuse to look away, when we remember that we belong to each other, when we keep showing up, long after the cameras are gone.

But we’re not just called to unmake violence in conflict zones like Syria and Iraq.

If the last several days have taught us anything, it’s that the frontlines are where we live. Our responsibility to unmake violence is not limited to Baghdad or Raqqa or Aleppo. It’s Manchester. It’s Portland. It’s where we live. All of us.

So what will you do?

The days are long gone when we can defer to a few heroic souls who prove their courage on distant frontlines. This is the choice we each must make. Everyday. It’s the choice that Taliesin Namkai-Meche and Ricky Best made when they confronted Jeremy Christian on that Portland train.

They could have looked the other way, pretending they couldn’t hear the threats and hateful slurs he hurled at those two girls. But they didn’t. Their love cost them their lives. But they loved anyway.

Tomorrow, it might be your turn. You might see someone in the grocery store getting picked on because of their race or religion. That’s your frontline. What are you going to do? When the thought flashes through your mind that the person in front of you might be armed, like Jeremy Christian was—that this could be your last moment, right there in that grocery aisle—will you love anyway?

Inaction in that moment is as much a choice as any other response. It’s a choice to let violence have the last word, to let the world be unmade.

The same forces that compel us to show up on the frontlines in Baghdad and Aleppo to love anyway should compel us right where we are, too.

The frontlines are where we live. Let’s show up and love anyway. No matter the cost.