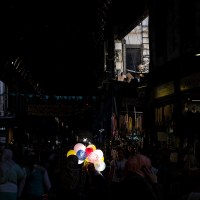 Deep in the heart of Old Damascus is an ancient market called Hamidiya. If you’ve spent any time in the Middle East, you know the vibe. A cascade of colors, smells, and sounds. Dimly lit, narrow passages below a huge, vaulted ceiling gives the whole market a maze-like feeling.

We decided to take a walk through the market to try to take our minds off all the wrong we saw around us in Syria. It wasn’t working.

The more we walked, the more angst I felt. Until I spotted those balloons…

The market can’t seem to decide whether to be pleasant or annoying. Subtle or garish. Soft or sandpapery. One minute you’re greeted by a friendly face, the next you’re assaulted by a smell. One shopkeeper shakes your hand, another almost angrily tries to force his wares on you. A pile of garbage lies next to a beautiful painting. A child licks ice cream next to a weeping beggar.

The market just felt confusing, and to me, that’s a perfect representation of Syria.

Syria is a paradox. Syria is impossible.

The country is at once hope and despair.

We ducked into a smaller side street filled with old rugs, sequins, hand-carved totems and more than my tired eyes could take in. People saw my camera and before I’d even looked at them, covered their face with both hands. One man stepped quickly toward me. His accent was heavy with cigarette smoke: “Who are you? Where you come from?!”

I just smiled, patted him on the shoulder, and kept walking.

The walk was meant to be relaxing. Oh well.

We rounded a corner, came back into the main thoroughfare of the market, and that’s when I noticed a bright patch of color. My friend was focused on something in a shop window. I told him I wanted to walk further ahead and he muttered something.

I moved closer, the color became brighter, larger, I realized it was balloons.

In all the dark, dingy light, all the sideways glances and anxious looks, there was something about those balloons. The color. The brilliant light.

This was exactly the situation my Syrian friends here were trying to avoid—an American wandering off with a camera in a crowded market. But something about the dazzling light and color…

The huge, burly teddy bear selling the balloons told me his name was Moataz. He picked that spot because it’s one of the only places where light shines through the roof of the market. His balloons light up everything around, making people stop and stare. But the balloons were nothing compared to his smile. He beamed at people around him. He saw me and waved with such enthusiasm I was sure he meant it for someone behind me.

He told me about his love for Damascus, he shared which neighborhood he’s from and how long he’s lived here and how important this market is for his people. He laughed when he saw the back of my camera—like the glowing balloons were the funniest thing he’d ever seen.

I share this because it was a moment with no paradox. This was only beauty, only right, only laughter, only life. Most moments in Syria are conflicted, and that’s ok. It’s important to honor the loss and pain people are experiencing.

Many Syrians can never come home, and they’ll ache for their homeland for the rest of their lives.

Many Syrians are still here, but they’ll have to live the rest of their lives haunted by the ghosts of what’s now gone.

But for just a few minutes, in an old market, we laughed.

We were like children, giggling at balloons, grateful for a moment.