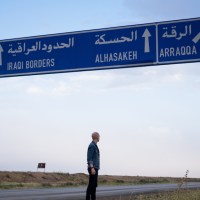 “Where… people are not getting help?”

The woman repeated the question again, and we nodded again. She’s an official whose job is to help aid organizations begin work in northern Syria, but our request took her by surprise. She assumed we wanted to deliver aid to displacement camps, just like all the others.

“So you want to help in a place with a lot of need, where other groups won’t?”

Then a look of understanding spread over her face. Her eyes lit up, she smiled, and tilted her head back.

“Ahhhh, you must go to Tabqa! It was only liberated a few days ago, but nobody is helping there.”

Tabqa is on the frontlines near Raqqa. It is known to be extremely dangerous. A few days later, we were near that front, just a few miles from ISIS’s capital city.

It’s difficult to overstate how important Raqqa is to ISIS. If Mosul is the heart of ISIS, Raqqa is their brain.

The so-called caliphate’s top leadership is situated in Raqqa, a large city that sits on the Euphrates River in northern Syria. It is the capital of their empire. This week, the battle began to recapture Raqqa and liberate tens of thousands of civilians trapped inside.

1. The battle for Raqqa will likely take months, and it’s a big deal.

This fight probably won’t get the media coverage it deserves, partially because journalists can’t get to this part of Syria easily, and partially because hardly anyone outside Syria has ever heard of Raqqa. Still, the recapture of Raqqa will further diminish ISIS’s physical presence in the Middle East. The U.S.-led coalition declared this operation would be a “decisive blow to the idea of ISIS as a physical caliphate.”

2. Very few international organizations are there, and the ones who are there are doing very little.

That’s not to say the work being done isn’t valuable—it’s essential!—but it’s just not enough. We heard it over and over from people:

Local tribal, political, and religious leaders all told us about the huge numbers of people getting very little help. The beauty of the situation is the way communities are banding together to help one another through the crisis—but that in turn puts a burden on these communities as they welcome more and more refugees into their homes.

The international community must step in soon.

When we showed up during the battle for Fallujah last year, our path was clear. In Shirqat, Qayyarah, Tal Afar, and all kinds of other places you may not have even heard of, our path was clear. As we’ve responded on the frontlines in Mosul, our path has been clear. When families fled Aleppo and when chemical bombs fell on families in Syria, we knew what we were able to do, and we are doing it.

Of course, knowing what to do and actually doing it aren’t the same thing. None of this work was easy, but we knew how to move forward to make sure people received the help they need.

This time, the way isn’t so clear—not yet, anyway. Just reaching these families, without any food, required enormous effort and time. Getting food into some of these towns—many of which are still filled with traps and unexploded bombs and possibly holed-up ISIS fighters—seems nearly impossible.

Why share all this with you? Because we need you with us.

We need you stepping into this fight. We need you to love these people, right alongside us, like you have done so many times before in so many other places.

Right now, the best way you can help is by becoming a monthly sponsor. The need in this region is overwhelming and people need as much help as we can give. Our monthly sponsors help us know how much that is.

We don’t have all the answers, but we do have the answer: we will go anyway. We’ll give and serve anyway.

We will love anyway. Because the people of Raqqa are worthy of it.

Will you go with us?

Go where no one else will go. Help families caught up in the battle for Raqqa.