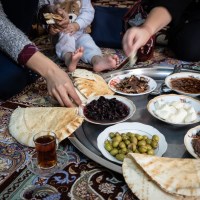 There are times when we make new friends, and it feels like we’ve known the other person our whole lives. We share experiences in common, favorite dishes, binge-watching habits, and podcast preferences. There is so much to talk about from the very start, and we leave feeling seen, and a little bit excited, if we’re honest with ourselves.

Not all friendships start that way. Some are so very awkward, we doubt we ever knew how to be a friend. And perhaps we didn’t know as much as we thought.

“Oh, yeah, it was so awkward. I mean, we’re not used to just sitting with people, much less strangers in their house and not saying anything. I think so often we cover up our insecurities or discomfort with just chatter. With small talk… ” Shawn Smucker is a writer, husband, father, and 13th generation Pennsylvanian. His life and his community is filled with a range of relatives, and friends of relatives. It’s hard for him to meet anyone in his community and not find some kind of personal connection.

We spoke with Shawn recently about a friendship he forged with a man named Mohammad. When they first met at a resettlement agency, with staff translating, Mohammad and his family had been in the US just three months. Shawn and Mohammad were similar ages, and both had families, but other than that, they didn’t seem to have much in common.

Shawn wanted to write a book about refugees fleeing the Syrian war, and he hoped that Mohammad would be open to sharing his story. No promises, of course. The publishing world is notoriously fickle. Even so, Mohammad was all in.

What grew out of that first meeting was more than a book, but also a powerful friendship.

But the journey definitely wasn’t easy.

“I think when the language is a little bit of a barrier, and you’re not really sure what to talk about, there’s a lot of time where we would just sit. You know, he could sit for minutes on end and just sit there, and I started to become comfortable with that as time went on.”

But growing this relationship was important to Shawn, just as it was to Mohammad. Shawn would stop by Mohammad’s house when he was in his part of town. He would chat with Mohammad’s family, and drink strong coffee while sitting on couches lining the backyard patio.

At one point in their friendship, Mohammad’s father, back in Syria, passed away. Mohammad was on the other side of the world now, living with his family in the United States. He couldn’t return home to bury his father—but he could have a traditional wake in his new community. Mohammad invited most of the Syrian men in their Pennsylvanian town–15 or 20–as well as Shawn.

“When I got there, everyone was speaking in Arabic—everyone spoke in Arabic the entire time. I didn’t feel bad about it, but it’s strange. It’s strange to be in a gathering where you can’t understand a single word. And it’s certainly opened up my eyes to people who come into our culture and feel that way.”

Shawn had just finished lunch at home when he got the call from Mohammad to come and join them. He wasn’t hungry, but as he watched the large plastic mats being spread out on the floor of the dining room in the traditional style, and saw more food than his eyes could take in brought from the kitchen and set down in front of them, he figured he would take a bit of rice… maybe a piece of chicken.

“And my neighbor, the guy sitting next to me, literally shakes his head, takes my plate and just starts heaping food on it. He’s taking from every single dish–he hands me back this plate that is just mounded. He hands me more food than I could eat if I was absolutely famished. I was just shaking my head, thinking ‘Oh no. How am I going to do this?’

“But then I started to see if someone finished their plate, Muhammad would refill it. And I started to realize that for them, when they’re hosting an event like that–they’re having friends in–they are providing hospitality to other people. The goal is that you don’t run out. You shouldn’t run out of food.

“And as someone who is coming into that space of hospitality, the goal isn’t to clean your plate. The goal is to show ‘Oh my goodness! You’ve given me so much that I can’t even begin to finish it.’ It was such a beautiful flipping of the narrative, such a beautiful moment for me to think that’s what hospitality is—hospitality is making sure the person has more than enough.

If we never develop the courage to live through the awkward times, we lose the chance to be blessed—and to bless. And it is in these moments, that the kinds of relationships that get us out of our circles of friends that look and sound just like us, are made.