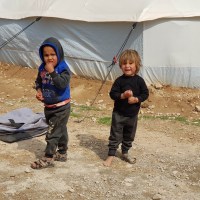 In the video, women and children gather around a lamp post in the refugee camp. There is shouting, as boys dusty from dancing on the parched desert point up into a clear, blue sky. At the top of the lamp post is a hand-made ISIS flag.

The shouting from those gathered around? “Remaining!” It comes from the title of a 2014 magazine produced by ISIS members, for ISIS members: Remaining and Expanding.

The video was made this week.

The declarations of ISIS’ defeat have been greatly exaggerated.

“Swampland”—that’s the literal translation of the name Al-Hawl. Located in the far northeastern section of Syria, near the border with Iraq, it was an undesirable area to live even before the UN opened a refugee camp here in 1991, during the first Gulf War.

The Al-Hawl camp was originally intended to house 15,000 refugees. As of this spring, it held 74,000 residents: women, children, and elderly relatives. Most were displaced by the Syrian war, but there is a newer section of the camp for foreign families connected to ISIS, either by declaration or accusation.

“Okay, so how they came here—it was a trick or was like a trick,” explained Michel Tannous, one of our team members on the ground in Syria, as he guided Jeremy Courtney and Jen Meyerson through the Al-Hawl camp. Our team walked the dirt streets, listening to those working here to better understand their needs. And they listened to a handful of residents who risked their safety to voice their perspective.

Michel continued, “So they were told to [surrender] to the forces controlling them right now, and they did. But, frankly…some of those women, they said, ‘If we had known that the Americans would [imprison us], we would have attacked them and ate their flesh.”

Al-Hawl is run by an alliance of Syrian militias, led by Kurdish fighters and backed by US forces. It is understaffed, underserved, and quite frankly dangerous for those who live here, particularly the section for “foreigners”—families who came from all over the world to live in a “pure Muslim homeland” established by ISIS.

When these ISIS families were offered safe passage out of communities being crushed by bombing campaigns, they believed they were being offered a safe place to live where they could continue to practice their chosen way of life. They had no idea the “safe place” being offered was essentially a prison camp, or that they would have no ability to leave.

Camp residents feel it was a bait-and-switch move, proving what ISIS leaders told them all along: that everyone outside their group is an untrustworthy liar.

If we turn away now, the violence will not end. It will only morph and move to new places.

“The fact is that they’re locked here because they don’t know what to do with them yet.” Michel said, explaining the situation of families in the “foreigners” section of the camp.

And so this hands-off approach has left hundreds of wives and children loyal to ISIS with only each other for company and comfort. There are no countering voices to add another perspective to their conversations. No one to show a different, more loving kind of life. No one to try to bring them back from the brink.

Instead, the isolation and horrible living conditions only serve to cement their extremist beliefs, and their longing for the kind of homeland ISIS promised.

ISIS was declared defeated in Iraq in 2017, yet the violence continues. ISIS continues.

Now is not the time to turn away.

But the presence this week of a hand-made flag, declaring loyalty to ISIS and the caliphate, mounted on a light pole—the highest point in the camp—is a potent reminder that if we turn away now, the violence will not end. It will only morph and move to new places.

But we do love people.

If we are a people of love, we need to prove ourselves to be who we say we are. We need to live a different way going forward, to create in our own hearts the space to see people, rather than ideologies.

It’s the only way to end war.

Join our community of monthly givers. We’re committed to ending war by choosing to love anyway.