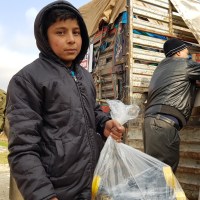 It’s 39ºF in Ahmad’s village right now. It’s not cold enough to freeze everything solid, just cold enough for the rain to soak his shoes and the wind to cut right through him.

You showed up to his Syrian village yesterday, with a truck filled with rain-proof boots and warm sleeping bags with waterproof mats inside. Ahmad was the son in his family sent to carry everything home, and he’s thrilled. It doesn’t show on his face? That’s because he’s anxious to try on the boots before any of his brothers see them. These are his very first pair of new shoes—he’s always had hand-me-downs from his brothers. Ahmed was anxious for the chance to choose a pair for himself.

Mahmoud came to pick up boots and sleeping bags and mats for his family. Afterward, he was going to scavenge some wood for the night so his family doesn’t freeze. Mahmoud’s family, like all the others here, were displaced from their homes by Syria’s civil war. The active violence moved on, so families returned home—only to find their homes destroyed, and what wasn’t destroyed was stolen.

The part of Syria where Mahmoud lives is facing a serious fuel crisis now. It’s nearly impossible to find the butane bottles they use for daily life—heating, cooking, even making a cup of tea. His neighbors wait in the cold for two to three days to find a single bottle of fuel.

So kids like Mahmoud are spending their days in the cold looking for wood. Their village is a collection of houses in the desert. There aren’t any forests nearby. Instead they gather what they can from roadsides and gardens, so they can keep warm at night.

Hasan came to the distribution while his father and older brother went out to find things to burn to heat their house. They haven’t been able to find any fuel to cook or to burn in a heater, so they’re looking for wood. They’re used to helping each other in their family. Hassan’s dad gave him his scarf to wear to the distribution, and his brother lent his shoes—Hassan is very excited that he now has warm shoes of his own to wear.

We learned that this village was suffering the combined effects of war and winter, and we responded with goods that would help keep residents warm. Ali, a cute 9-year-old, told us he couldn’t wait to put his new shoes on! Ali likes to run around in the fields around his village with the neighbor kids, and now he tells us proudly, they’ll be able to go more places with the waterproof boots!

Ali wasn’t quite as excited about the sleeping bags and mats, but his mom is. They all sleep together every night with his mother’s arms wrapped around them to stay warm.

Many of the families we stand alongside have narrow gaps that need to filled, in order for them to regain their ability to provide for their families and rebuild their lives.

Some families need a small business investment to get them back on their feet, like Firas, who had welding skills and a customer base, but no tools. It didn’t take much to transform his life.

Some families, like those in areas of Syria still feeling the impact of ongoing warfare, have a wider gap to bridge.  Moussa lost everyone in his family except his mother. Together the two struggle to make a way forward. Moussa helps his mom in every way he can, but he’s too young to provide for their needs on his own. You showed up for Moussa and his mom, and provided what they need to make it through cold nights—one less worry on their shoulders.

Mustafa? He’s 10-years-old. He didn’t talk much about his family’s situation. Really the thing on the front of his mind is that he wants to drive a motorcycle, but his mom won’t let him. Mustafa is a typical young boy, and not even war could take away his love for motorcycles.

He was excited about being warm in the new sleeping bag and mat he received. He was clear he will not share it with any of his siblings! Thanks to you, Mustafa doesn’t have to share anymore—you provided enough sleeping bags for his whole family. Tonight, if they all sleep close, it’s because they choose to, not because they have to to keep from freezing.

These boys all belong to families who are remaking home starting from scratch. They returned home to find rubble and ruin. This winter you are stepping in to make the process of remaking home a little warmer.

Help keep Syrian children and families warm and cared for this winter.