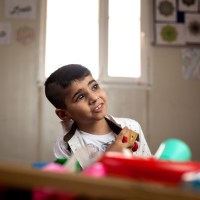 The boy fidgeted. I wasn’t sure if he understood me, his clouded eyes seemed to be searching.

“Look up at the light if you can see it.” Understanding me, his mother gently took her son’s cheeks in her hands and lifted his face toward the light.

When he was very young, still in Syria, Dilgash was diagnosed with a degenerative eye disease. The vision in one of his eyes is almost totally gone, and the other eye is also fading.

Darkness, holding toys close to his face, feeling his way around a room—this is Dilgash’s normal. Steadily fading eyesight hasn’t been easy, but he is used to it. In fact, he didn’t seem to realize it was unusual until his younger brother started school. Dilgash stayed home.

It broke his mother’s heart, having to explain to her eldest why he had to stay while other children bought backpacks, pencils, notebooks and left for school.

When the family escaped Syria and arrived in Iraq, they settled into a refugee camp that was so new, unfamiliar, and scary. What kind of opportunities would their children have in such a fenced-in, barbed-wired place like this?

Yet again the other children were able to start school, but Dilgash had to stay home with his mother. By now, his eyesight was even worse, and the family managed to take the boy to see a specialist.

After several ocular tests, the results came in as they often do here in Iraq: “There is no treatment for Dilgash inside Iraq. He would have to leave the country.”

His mother recalled how discouraging this all was for her, wondering if her radiant boy would ever have the opportunity to join other children out of the house.

Around that time, the family heard about a special place in the camp created just for children. A “safe space,” some called it. Local staff just called it the “Friendly Center.”

Dilgash’s mother took her children to the space to see it for herself, and after seeing how caring and committed the staff were, she realized Dilgash could benefit from a place like this.

So she began taking him to the space each month, each week, each day, and the boy’s growth has been remarkable. The staff in this friendly space for children are much more than babysitters; many are trained in social work and childhood development, and the growth of children like Dilgash—who was rejected by other schools and groups—is a testament to how important spaces like this are for refugee families.

The light may be dimming for Dilgash, but he was well-named—his heart is brilliant-bright, and with partnership from friends like you, he can finally join his brother and friends in a classroom, doing crafts, filling a backpack, playing games and learning language at his camp’s safe space for children.

This is why we are inviting you to support this space: to create a safe, healthy place for refugee children like Dilgash. When you give, you give children a chance to feel like normal kids again, you offer their parents relief, and you make sure hope doesn’t die as whole communities work to rebuild their lives.

I want to give to a safe space for children.