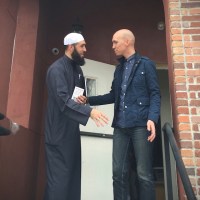 Houston’s devastation is horrific. After a year of so much division and violence, the easy thing would be to stay in our own communities—to show up for the people of Houston, but to show up with and for people who look like us and believe like we do.

Let me tell you about four congregations in Duluth, Minnesota, who believe they can write a new story of healing and reconciliation in their own city, even as they respond to the tragedy in Houston—alongside each other instead of apart.

When the call to help Houston came, I knew congregations in my city would show up and give. They would do what they’ve always done, donating mostly through their own denomination or like-minded churches. But what if they didn’t? What if they did something totally different? What if they saw the power of moving toward one another, across sectarian lines, to create a new story of how we respond to crisis by giving together?

What if our response to Hurricane Harvey doesn’t just empower Houston to rebuild, but also creates a new story of friendship, of faith groups working alongside each other instead of separately?

I desperately want that new story for my city. I knew it’s not that people in my city don’t care about each other; it’s that too often, we don’t see each other. The problem is separation. We’d been doing life on our own for so long we no longer believed the best of each other.

Coming together across religious lines to help Houston rebuild could rebuild so much more than just Houston. It could bring, healing, reconciliation, and a stronger community in my hometown of Duluth.

So with hopeful fingers I sent an invitation to Duluth’s mosque, synagogue, and several local churches. I waited nervously for a response. Many of them are minority faith organizations—I knew I had no right to ask them to come to the peacemaking table after experiencing so much hate and violence on a national and local scale this year. The fears and wounds they live with as they practice their faith daily, I can barely imagine. But I hoped anyway, and I crossed my fingers believing that a united response to Houston would bring healing for us all.

A few hours later, the first response pinged into my inbox. Through grateful tears I read the answer from the president of the local mosque, the Islamic Center of the Twin Ports. He didn’t just say “yes.” He said, “Of course we will. That’s what neighbors do.”

The next to respond were two pastors I’d seen at local meetings where we’d had the opportunity to come and listen to various marginalized groups in our community. St. Mark’s AME, an African-American congregation, and Peace United Church of Christ, a mainline, LGBTQ-affirming church. Pastor Kathy from Peace, asked me if I had heard from Temple Israel yet, I said I didn’t even have a phone number to follow up and ask. She smiled at me, and picked up the phone and said, “I’ll introduce you to the Rabbi, he’s great.” After she connected us, I found myself chatting with Rabbi Steinberg. The Temple decided to join us too.

The next two responses came with a quick, “No thank you, we’re giving through our denomination.” And the very last church said yes… until they found that the local mosque was involved. Then they politely backed out.

Out of a wild dream for peacemaking in my neighborhood and a trembling email invitation, #DuluthStrong was born. Not everyone jumped on board as I had hoped, but four very different faith communities were standing together as one to show up for Houston. They are choosing to be neighbors and represent Duluth together, instead of as their separate denominations. Their goal is to raise $10,000 together to empower Houston to rebuild.

They believe in love over fear. They know being a neighbor means you have to move toward someone you would usually move away from.

We can’t allow different politics or different beliefs to rob of us of the chance to heal our own communities’ divides, of pursuing reconciliation and creating new stories of relationship with each other. We need communities that neighbor each other as much as Houston needs to know that we will show up for them as they rebuild long past when the media moves on.

We need congregations who will walk across the street and learn each other’s names. Who will stand with those on the other side of the street instead of only those in the pew next to them. Who will lay down what’s comfortable or easy to build a new story of a city that responds to tragedies together instead of apart.

I don’t know about you, but I’m ready to link arms with my neighbors, even if it makes me uncomfortable at times. Even if it might confuse my friends or my own faith community.

I’m ready to stop talking about what’s wrong and show up to make something right.

Houston needs us to show up for them now. But how we show up has the possibility not just to repair a broken city, but to build the more beautiful world our hearts know is possible.

#DuluthStrong is a partnership between four faith communities—a mosque, synagogue, and two churches—seeking to raise $10,000 for the people of Houston. As of today, they’ve raised just over 20% of their goal.

Not everyone wants to step across sectarian lines and work together for the common good. But we know you’re different. You’ve already chosen to go where no one else will go to love the ones no one else will love—in Iraq, in Syria, and so many other places.

So let’s come alongside #DuluthStrong and these four faith communities who are choosing to link arms with their neighbors instead of accepting the status quo of religious fear and division. Let’s help them reach their $10,000 goal.

When you donate to #DuluthStrong, you aren’t just helping rebuild Houston; you are rebuilding broken relationships. You are rejecting the false narrative of “us versus them.” You are declaring that we are made to be neighbors and that our church buildings shouldn’t divide us, they should launch us further into loving each other.

Every dollar you give will go toward our emergency response in Houston, unmaking the violence of Hurricane Harvey, while building peace that can outlast any storm. Join us.