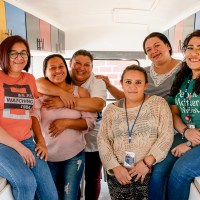 “Go away, or we’ll burn you alive” is what the sign read. The Mara gang’s message was clear. Jazmin and her family hurriedly packed what they could and left before the sun broke over the Honduran valley they once called home. The Mara is a gang well-known for murder, rape, and brutality.

Ironically, after weathering the economic devastation COVID-19 had brought to Honduras, Jazmin thought the worst was behind her and her family. When she and her husband lost their jobs, they survived by opening a small store. Her husband fixed cell phones, did welding, and repaired motorcycles while Jazmin sold shoes, clothing, and other small items. That store proved to be their undoing.

The Mara thought Jazmin’s family business was ideally situated to be a gang lookout point and a place to sell drugs. In spite of the threat of “you know what will happen [if you refuse],” Jazmin’s husband declined their offer, filed a report, and waited for the next menacing visit. When the sign threatening to burn the family alive showed up outside their business’s front door, they decided to run. Jazmin had lost other family members who’d dared to refuse the M13 gang, and she didn’t want her little boy to suffer a similar, savage fate.

Building something new and having to leave it all behind to walk across countries in search of safety requires steely grit and self-confident determination. Yet, this is what Jazmin and her family did. They made their way through Honduras to Guatemala, where they faced extortion and had to pay ransoms. When they arrived in Tapachula, southern Mexico, their funds were again depleted.

Traveling north through Mexico was no better. Indifferent to the suffering most asylum seekers have already faced, the Mexican authorities harassed Jazmin and her family, making their harrowing journey almost intolerable. The family faced xenophobia, threats, insults, and slurs. They were called killers, thieves, and scum instead of mothers, entrepreneurs, or survivors. Holding on to personal dignity was hard.

Asylum seekers have lost their possessions, homes, livelihoods, communities, or loved ones. They’ve been traveling for days, maybe in the same clothes, probably without the luxury of a shower. From appearances, it’s impossible to see the talent, skills, relationships, and authority they used to have in their pre-dispossessed lives. How do we reconcile the chasm between who a migrant is and what people say about migrants?

People fleeing violence need a regrounding when they don’t have much but the clothes on their backs. That’s why Preemptive Love partners with shelters in Juarez, near the US – Mexico border, providing food relief, hygiene products, job/tech and life skills training, and job creation programming. More important is how we provide programming.

Our work is relational, which is why we often refer to displaced people as our “migrant friends.” Haniel, a Preemptive Love program officer based in Mexico explains our approach as needing “to know the people we are helping. We sit down, talk, visit, and listen…We see them.” Listening allows us to come alongside people and see their greatness rather than their need. Calling displaced people “friends” is a recognition of our mutual equality and dignity.

There is no single story for our migrant friends. They are mothers and fathers, daughters and sons, just like us. They’ve had livelihoods, an education, or dreams, just like us. They want to live in safety and have a chance to thrive, just like us. At Preemptive Love, we are upholding personal dignity as we work to change the story of the word migrant to friend.