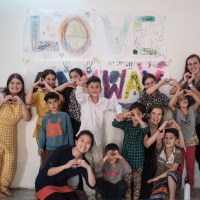 During World War II, a Girls Guide Club (similar to Girl Scouts) was camping in the woods in Germany when they were captured and imprisoned in a concentration camp.

The children had their guides, but not their parents.

In the camp, the guides kept the girls in routine, doing exactly what they had always done every day before, just like at camp.

Sit up straight. Use your manners. Clear the table.

Some might think it’s cruel, this enforcement of rules when the girls are already in an atrocious situation. Or pointless, focusing on manners and personal responsibility in a concentration camp.

Sit up straight. Use your manners. Clear the table.

A refugee camp is not the same, but the trauma is still real, still present. Children are far from home, torn from family members, crowded with strangers, faced with the memories of what they’ve seen, what they’ve experienced. Schools in a refugee camp—when they’re even available—are often crowded, with too many students and not enough teachers.

But in the midst of trauma, we can provide normalcy, predictability. We can return kids to school.

We can provide a place where kids can learn and play, be seen and loved and known. Where social workers engage in therapeutic art and music and play with children. Where young adults learn to overcome fear through rock climbing. Where toddlers play dress-up and see the world with child-like wonder once more.

Where kids and teenagers can learn English through music and play, giving them an opening into the outside world.

Here, girls don’t have to become child brides. They can catch up on their studies, learn to read and write, find their voices and their power.

Here, boys don’t have to join armed forces or get jobs before they’re even grown to provide for their families. They can learn who they are apart from ideology, they can find opportunity and hope instead of conflict and oppression.

It starts here, in the next generation, a chorus of children wounded by war but ready to rise. Their lives have been shredded by bombs and bullets—but with the routine of school, the steady love of teachers and counselors, their world can be remade again.

Invest in the future of refugee kids.

I want to give to a refugee child’s education.