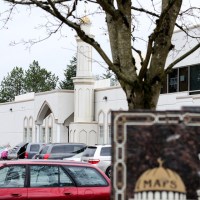 “Are you apprehensive about anything?”

“I’m afraid that they are going to be afraid of me.”

Anne and I are standing outside a mosque in the suburbs of Seattle. It’s noon on a Friday, and we are here for Jummah Prayers, the Islamic equivalent of a Sunday church service. This is Anne’s first visit to a mosque, and her scarf keeps slipping off her head as I give her a little bit of information about what to expect during the service.

“What makes you think they’ll be afraid of you?” I ask.

“There’s just a lot of security.” She glances across the parking lot at the two men with ear pieces standing by the door. “I understand why. I just hope they don’t think I’m just another angry white person.”

There’s a reason for all the security. This mosque has faced a host of issues recently—from threats of violence to repeated vandalism—and another mosque nearby was recently burned down.

There’s little chance of people mistaking Anne for a violent Islamophobe. She’s friendly and warm and is clearly trying hard to do everything right. Earlier that morning, she texted me photos of outfit options, just be sure she was dressed appropriately.

When I asked her why she volunteered to attend prayers with me, she said, “In the height of the chaos [in our country], I wanted to be present and reach across and show that Christians can love others no matter what their religion is.”

So… she was walking into a mosque to be a better Christian. What a beautiful paradox.

We walked in, took our shoes off, and entered the women’s section of the mosque. As we pushed the door open, I saw several women I knew from an interfaith photography project that I worked on. They welcomed us warmly and invited us to sit with them on the beautiful red and gold carpet. The lines and patterns on the floor help people sit shoulder-to-shoulder in long lines during prayers, because sitting close enough to touch is an important part of the Muslim prayer ritual.

Even though I’d forgotten to prepare Anne for the lack of personal space (my bad), she rolled with it gracefully: “It was no problem!” she told me afterward. “Sitting close like that made me feel like I was part of something bigger than myself. It actually reminded me of communion at my church.”

We listened to the imam read from the Quran and give a khutbah (the Islamic version of a sermon.) He referenced the story of Jonah and several other stories that Anne recognized from the Bible. She was surprised by how much of it resonated with her.

“It all felt so comfortable. I feel like I’ve actually heard that sermon in my church before,” she laughed.

The prayers themselves are in Arabic and are accompanied by certain movements—a combination of kneeling, bowing, and hand motions as well as verbal responses—reminiscent of Catholic masses and prayer rituals. (Come to think of it, the way the women and clergy are dressed in Catholic services are not too dissimilar either.) We followed along by mimicking the movements of the women sitting next to us.

On our way out of the service, I asked Anne if anything surprised her. She mentioned that the only thing that really threw her off was the fact that the men and women are separated during the service. At this particular mosque, the women sit in a section behind the men—it’s not walled off, but it is a separate section of carpet.

“It makes me think of what my conservative friends say about gender inequality in Islam, and makes me wonder,” Anne said afterward.

I shared that the separation is meant to avoid distraction during the service and particularly during prayer. I once heard a Muslim friend of mine explained it like this: “During prayers, we are bending over a lot. And when a woman bends over in front of you, no matter who are, you’re going to look. Because it looks good! But when a man bends over in front of you… meh.”

Anne laughed and agreed that it made sense.

As we talked, Anne did her best to use the Arabic words for things, but often ended up using equivalent Christian terms to describe her experience… which, to her surprise, worked perfectly well most of the time.

It seemed like the thing that surprised her most was how familiar and not-weird it felt. She was slightly taken aback by how much it felt like her own church experience.

When I called Anne a week later to catch up, she already had plans to go back to the mosque with a neighbor who had never been, to take a tour and make some new Muslim friends. They had also decided to go visit several other religious venues in the area because they didn’t know anything about them and wanted to learn. She was excited to explore, to discover new people and places that were previously outside her comfort zone.

I hung up the phone so happy. I couldn’t believe one visit to a mosque was all it took to convince someone that places that feel foreign are usually not only willing to have people visit and learn, but want this to happen. They want to share their world with those who generally aren’t a part of it. They want to be understood. Just like we do. Just like all people do.