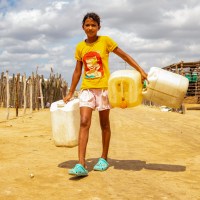 Rays of sunlight bounce off the truck’s water tank as its wheels bumble down the sandy dirt road. Over the maternal bleat of goats, northern trade winds blow.

The truck passes through a gate made of cactus stems and dry wood, wired together as fence posts, and into a settlement where a crowd of women and skinny-armed children wait.  Smiles break across their faces as the truck slows and parks. Above, the sun plays hide and seek with the clouds.

The women and children hurry to meet the water truck, which has stopped near two large water storage containers, and form a lazy line. Now that our water truck is here, they’ll be able to drink clean water, cook, bathe, and wash their dishes and clothes easily. No more paying for a motorcycle taxi to go buy water.

This settlement is home to members of the Wayuu tribe, an indigenous and ancestral community that settled in the La Guajira peninsula nearly 2000 years ago. Spanning from northeast Colombia to the Venezuelan state of Zulia, La Guajira is a harsh paradox. Skirting over 1,000 miles of Caribbean saltwater coastline, the region contains 5,000+ square miles of arid desert. There is not enough fresh water here, nor is there the infrastructure to import fresh water from other areas.

Fresh water is not just a source of physical life for the Wayuu. Rain, and Maleiwa, the god associated with rain, are central to Wayuu spiritual life. Because Maleiwa is present in small rivers, lakes, lagoons, and rain, water locations are sacred places where women perform rituals, clean bad energy, or ask for protection. Water is alive, so out of respect, the Wayuu do not live near “water places.” Instead, using traditional methods, the Wayuu collect, store, and conserve water in jagueyes, natural aquifers which are filled by rain.

Most Wayuu live in small, isolated communities called rancherías. Families live in huts made from cactus, mud, and wood walls, covered by corrugated tin roofs. There is no running water nor are there government plans to install the infrastructure for it. Instead, every drop, cup, pot, or basin of water used for cooking, cleaning, washing, and consumption must be brought into the rancherías. As the jagueyes dry up or become contaminated and the water crisis worsens, Wayuu moms, dads, and kids have to travel farther, sometimes on foot, for what flows so effortlessly from our taps with the flick of a faucet handle.

Causes of the Water Crisis

The Rancheria River, the main river running through La Guajira, Colombia, feeds the creeks, streams, and jagueyes that the Wayuu have traditionally relied on for water. In 1980, a European-based coal mining company broke ground, and today, it is the world’s largest open-pit coal mine. This multi-billion dollar company dammed the Rancheria to satisfy its water needs at the expense of the surrounding communities. It promised to build pipelines from the dam’s reservoir to 18 Wayuu communities, but the multinational mining giant never fulfilled its obligations. The government did not force it to comply either. Instead, the mining company currently uses between 4.2 million and 9 million gallons of water daily while communities in the region go thirsty.

Not only has the mining company dammed the river, but it has also diverted tributaries and smaller streams, further cutting communities off from their water sources and destroying farming livelihoods. It diverts streams to extract coal from their riverbeds, which the Wayuu believe will kill the streams, intrinsic to Wayuu culture. Over 17 streams have been diverted.

When the streams are diverted so the mining company can extract fossil fuels, villages, farmlands, and whatever vegetation grows around the streams are destroyed. Coal extraction ejects particulate matter and emits sulfur dioxide and nitrogen oxide while toxic coal ash further contaminates river and groundwater resources.

There used to be predictable rainy and dry seasons in La Guajira, which followed the weather patterns along the equator. Now, the weather is unpredictable. From 2012 to 2015, there was almost no rain in the region, causing the Wayuu aquifers to dry out. Extended droughts decimate agricultural activities, and lead to a scarcity of potable water and food.

Higher temperatures cause the atmosphere to hold more water than it used to. When the rain finally comes, this accumulated moisture drenches mine-degraded and desertified land, which can’t absorb it. As a result, there are floods and landslides, and remote communities become inaccessible. This past spring, we couldn’t visit one of the settlements we serve because heavy rain had made the roads impassable.

Effects of the Water Shortage

The lack of potable water adversely affects livestock, crops, and people in La Guajira. One of the most common livelihoods for the Wayuu is herding goats. Goats have real significance for Wayuu families, acting as a type of family savings account. Goats are used as dowries, to pay off debts, or as down payments. Most families have one, and even if a family is hungry, they will not slaughter their goat.

Because of a lack of rainfall, there is little vegetation for livestock to eat. Goats wind up eating plastic trash blown from the sandy dirt roads into the fields. One young woman in a settlement we serve said she used to have five goats, but three had died from eating plastic.

Severe droughts and soaring temperatures have upended Wayuu farming practices. Wayuu farmers used to plant crops such as beans, corn, melon, and tomatoes according to seasonal rains, which are now infrequent and unpredictable. Crops wither as the land becomes increasingly desertified. As a result, Wayuu farmers are no longer self-sufficient, and if they have money, they have to buy the produce they used to grow.

Because there are few jobs in La Guajira, most people cannot afford to buy food or water. Instead, families skip meals, eat smaller meals, or prepare less nutritious food. Children sometimes eat only once per day. In La Guajira, children die of malnutrition at a rate six times Colombia’s national average, and the mortality rate of children under five years old has been increasing in La Guajira while it falls elsewhere in Colombia. Children who survive childhood malnutrition have worse health and limited development as adults.

A Story Too Big To Change?

While working with a local partner to provide health services for the Wayuu, community members told us access to clean water was their first priority. Spending time in the Wayuu settlements, we heard and saw these families’ needs and added water relief into our health services project. As a result, our community of peacemakers is providing stop-gap solutions for families in need of clean water until longer-term solutions can be put into place.

We fill truck tanks with potable water from a local water center and bring it into the Wayuu settlement where we installed 2 5,000-liter water tanks. Three times a month, we’re able to fill these tanks. Thanks to you, each of the 150 families in this settlement receives 60 to 70 liters of potable water per delivery to meet their water needs.

Without you, these families would have to walk over thirty minutes in hot and humid conditions to the water center carrying their own jugs, buy water, and then lug the jugs of water home. Those who can afford to will take a motorcycle taxi to the water center and then back or buy it from a traveling water seller at an inflated price. Both options mean there is less money available to buy food. Thanks to you, we can change the story for these vulnerable families. Now, they don’t have to spend one valuable resource to obtain another. Without having to leave their settlement, Wayuu moms, dads, and kids have clean drinking water. And next month, we’ll be back.